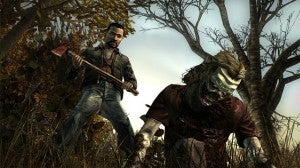 Telltale Games, who have been releasing an epic adventure game set in the world of Robert Kirkman's The Walking Dead in chapters over the course of a few months, will finally release the complete game as a retail release on December 4, theoretically in time for those who didn't already buy it on Steam to get it for Christmas. Asked whether, similar to Telltale's popular Back to the Future game, there would be a disc release for The Walking Dead that fans could buy at a brick-and-mortar store, the developer responded via Twitter, "As a matter of fact, yes! Entire season on disc. Dec 4th in NA for Xbox 360 and PS3. EU dates TBA." The game, which is being serialized as five episodes, allow players to play as a character new to the game--"Lee Everett, a convicted criminal, who has been given a second chance at life in a world devastated by the undead," says the official website. "With corpses returning to life and survivors stopping at nothing to maintain their own safety, protecting an orphaned girl named Clementine may offer him redemption in a world gone to hell." Clementine's plight was the subject of the first, haunting trailer for the game; she was visiting with family or friends away from her parents when the plague started, and her parents are indeed searching for her, at least as of the beginning of the game's first episode. You also play in the earliest days of the infestation, meeting up with characters who would later appear in the comics and on the TV show before they ever find their way to Atlanta to meet up with Rick Grimes and company, which means that a potential sequel might feature a lot more familiar faces and situations. It could be fascinating to see Everett interact with fellow convicts at Rick's prison, for instance, or make his way through the dangers of Woodbury.

The Walking Dead Video Game Will Be Released December 4

Star Wars: Andor Composer Breaks Down the Music of Kenari

Everything Coming to Tubi in October 2022

In the Soop: Friendcation Trailer Released by Disney+