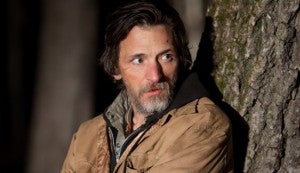 had the opportnity to speak with character actor John Hawkes today, and discuss with him why he apparently turned down a meaty role in AMC's hit drama The Walking Dead. The veteran actor, best known for roles in Deadwood and American Gangster, is currently doing promotions for the Blu-Ray release of director Robert Rodriguez's Roadracers, a 1994 Showtime movie in which he starred alongside Salma Hayek and David Arquette. The website had previously reported that Hawkes was being courted for the role of The Governor, the central antagonist in The Walking Dead's upcoming third season, but nothing came of it and eventually the role went to David Morrisey. Apparently, Hawkes had two major concerns: first, that he might not be right for the role in spite of what the producers thought; and second, that he may be subject to restrictions he wasn't comfortable with if he were to take a role on commercial television. "They offered me the role, and I just felt there would be someone else who could do it better," the actor explained. "I was flattered, and I took a look at the series. It held interest for me, but I just didn't feel like I was the guy for it. I have to be careful of what TV shows I choose, particularly ones that have commercials in them, because it's going to be a different kind of television show. There are going to be sponsors. No matter how good the show is, if there are commercials, it's going to be a different show, to me. That's just my personal feeling. Yeah, it was nice of them to ask, and it's a good show, but, again, I just didn't feel I was the guy. They came to me and sent me the graphic novel and the first two seasons. I took a look at them, and just didn't feel like it was for me." Ultimately the decision to cast Morrissey has been met with glee by showrunners, who have gone out of their way to extol his virtues at ever opportunity. Casting The Governor is a unique challenge in that not only is the character one of the most irredeemable and evil characters in the comic book series, but his rise to power has been documented in two prose novels by creator Robert Kirkman and co-author Jay Bonansinga. Given the massive appeal of The Walking Dead, it's not beyond the realm of believability to think that after season three is finished, Morrissey may be asked to take on one or both of those novels as a TV movie or miniseries to expand the Walking Dead brand for AMC. The show's third season

The Walking Dead Villain That Almost Was