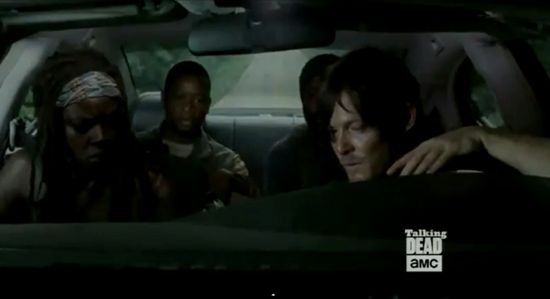 During the "Isolation" episode of The Walking Dead, Daryl, Michonne, Bob, & Tyreese hear a voice on the radio. The reception is poor, so it's difficult to hear exactly what the voice on the radio is saying. However, there was a Walking Dead trailer that aired at 2013 San Diego Comic Con, which actually featured the exact same scene with a different, much clearer voice. On the Comic Con Trailer (check at the 4:10 mark below), the voice on the radio can very clearly be heard to say, "Sanctuary. Those who arrive survive." However, in the actual scene that aired on television, the voice has become more distorted for some reason. We guess the producers decided they  wanted what was being said to be more mysterious. However, it appears that the voice is still saying, "Sanctuary. Those who arrive survive." What does this mean? If the show follows the comic books, then The Sanctuary is the home of a group known as The Saviors. The Saviors are a ruthless, antagonistic group run by a man named Negan. Of course, the TV series doesn't always follow the comic book, so sanctuary could turn out to be something else entirely.

The Walking Dead: What Does The Voice On The Radio Say?