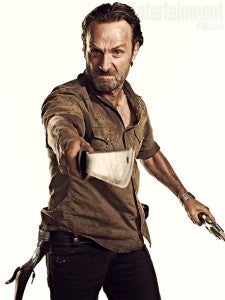 Warning: Major spoilers ahead for tonight's episode of AMC's The Walking Dead. Only proceed if you've seen it.

After tonight's episode, it seems as though there's a strong likelihood that "the Ricktatorship" is dead, or at least dead as we know it. So far this season, The Walking Dead has been building up Rick. Last year, many fans and critics complained that he was too soft, too indecisive, too willing to compromise and too slow to make the truly hard, brutal decisions that being the hero of a story like The Walking Dead seems to demand. We talked about this once before, actually, in the context that it seemed early on in this season that those days were over. But they may have come crashing back again in the final moments of tonight's episode, as we saw Rick collapse to the ground sobbing at the loss of his wife (and of what little remained of his son's innocence). Ironically, as much as the fans demanded that Rick be colder, crueler and more decisive, it was exactly that which cost him his wife--admittedly indirectly, but still. Think back to that second episode, when everyone collectively whooped and said, "That's what we've been asking for!" Rick split Tomas's skull with a machete and then chased Andrew through the prison, eventually locking him out and leaving him to be consumed by walkers. 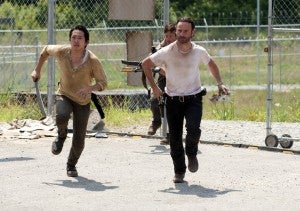 Andrew begged to come back in, but Rick paid him no heed. It was a moment of calculated bad-assery on the part of Rick, and on the part of the show's writers as well. It showed that he wasn't averse to what amounted to torture if he felt someone was a threat to his group. But if he had let Andrew in--if he had locked him up, or even just killed him quickly and painlessly on the spot rather than exiling him to "certain" death to prove a point--there would have been nobody inside the prison walls who had both the motive and the opportunity to set tonight's deadly chain of events into motion. T-Dog's and, even more urgently Lori's deaths are on Rick in an unambiguous way. This week, before all hell broke loose, Rick wanted to exile Axel and Oscar into the wild to take their chances. Leaving aside the fact that we've all just seen what's wrong with that plan, T-Dog strenuously objected, saying essentially that they were sentencing the men to death, even if they weren't admitting it to themselves. It sounded a lot like what you used to hear from Rick, and it set something off in my head: Rick wasn't always indecisive. He was simply indecisive for a short period of time during which he was transitioning from a Superman-style hero who always put himself on the line for everyone's benefit--somebody who'd protect his people at any cost, because it was the right thing to do--to someone who made colder, more calculated decisions about life and death. At the start of season one, Rick's moral compass was more like Dale's, or T-Dog's. But being that good, all the time, can get you killed in the dark, twisted world Rick lives in. Over time, he's become much more like Shane...and when Lori told Carl not to let the world change him, and to always do what's right, she wasn't just talking about herself, the adultery and backstage Lady MacBeth stuff that put Rick and Shane at odds. She was talking about her husband, who has been corrupted by the world of The Walking Dead and who isn't the man he was when all of this started anymore. Can Rick bounce back from Lori's death? It's hard to say. In the comics, it took a long time. During those issues, he managed to keep it together for the benefit of the group, but he didn't have someone as strong as Daryl to fall back on. There was also a fairly absurd coping mechanism that seems really, really unlikely to make it to television that involved Rick carrying around a broken telephone, fantasizing that he was talking to Lori on it during times of high stress. It's one of the least plausible things to translate from the entirety of Robert Kirkman's Image Comics/Skybound series. If I had to guess, I'd say it will be the Governor and the threat posed by Woodbury to his remaining loved ones that push Rick back into action and put him back on the path toward sanity and maybe even heroism. The real challenge, then, becomes finding a new leadership style that doesn't so completely eschew what made him special in the first place, but which also doesn't send viewers to the Internet to complain that Rick is weak again.

The Walking Dead: What Does Tonight's Episode Mean for Rick?