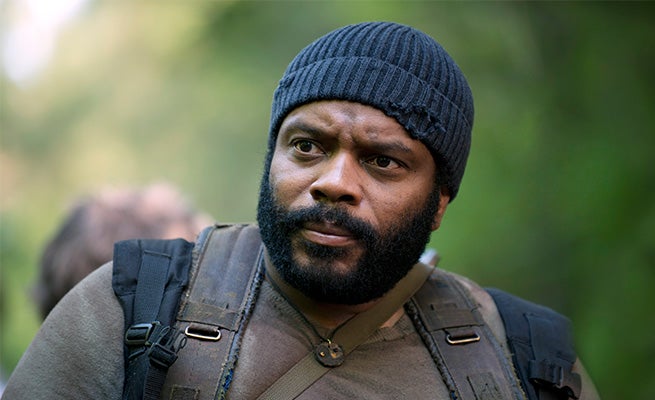 The Walking Dead Season 5 midseason premiere starts out with digging, Maggie crying and others crying, then the group is at a funeral, sermon led by Father Gabriel.

Flashes come across the screen of previous locations (prison, Woodbury) where the group has lived in the apocalypse and people they have lost. Rick is trying to convince the group to go on a long trip to Richmond, describing how safe it allegedly is. Lizzie and Mika tell us, "It's better now."

The group travels through South Carolina, speaking on walkie talkies. Rick tells Carol they are "half way there." Carol and Rick agree they're due for the easy part of the trip. Noah and Tyreese discuss the trade. Tyreese doesn't want to face what's going on and speaks about how his father told him how important it is to keep up with news and current events, no matter how far away or horrible. His dad called this awareness, "the high cost of living." Noah has family in Richmond, at least he hopes. Rick tells Tyreese to pull over, the group will continue on foot to be careful.

Rick and company leave their truck with other abandoned cars, hoping they'll blend in with the wreck to any passers by. As they travel through the woods, they come across and maneuver through some cable. Noah nicks his forehead on it. Glenn spots Shirewilt. The group moves from the woods to the road. They pass a broken grandfather clock and arrive at a locked gate. Glenn takes the initiative of climbing up to see what's inside. He shakes his head, and Noah climbs up and over to the other side, followed by everyone else.

Noah starts to run, Rick chases. There are bodies in the street and dirty, abandoned cars. "Wolves not fear" is in graffiti on bricks in the neighborhood. The group huddles near a sobbing Noah. Rick wants to "head back," but Michonne says, "then what?"

Glenn suggests a quick sweep of the area. Tyreese stays with Noah. Rick tells Carol they made it, but the neighborhood has fallen. Michonne stomps a shirt out of a frame. Rick and Glenn discuss Beth's death and whether or not Dawn wanted to kill her at all. Rick admits he wanted to kill Dawn. He explains that this trip to Wiltshire was for Beth who wanted Noah to get here, regardless of whether or not he thought it would still be there.

Noah continues crying. Tyreese tells Noah a story about continuing when times are tough, if he had given up he would not have been able to save Judith and return her to her father. He tells Noah, "This isn't the end." Noah rises up beside Tyreese and starts off, in a hurry, down the street.

Glenn and Rick discuss the horrors of Terminus and the crazy guy in the container. Glenn says things were okay since he got Maggie back, but losing Washington and losing Beth after finding out she was alive, he would shoot people responsible for their difficulties, captures, or murders. Michonne says they need to stop, referring to pitying themselves.

Noah tries to enter his house, but Tyreese advises against it. He'll go first. Tyreese knocks a few times then heads inside, Noah following. A body with a chunk of its head missing lays on the living room floor. Noah stares at it and approaches, slowly. The house is a mess. Noah takes a blanket from the floor and covers the body. Tyreese hears a voice and ventures off down the hallway. Walker gasps come from beyond a door. Tyreese finds a dead child in its bed but his attention is grabbed by photos on the wall. Photos of twin brothers. A walker approaches from behind and sneaks up on Tyreese.

Tyreese hears the walker and turns around, but the walker bites Tyreese's arm. Noah uses a toy airplane to kill the walker.

There is a flashback to a news report of random violence along the countryside. Back to the present, Tyreese bleeds from his arm. Martin, the guy from the cabin and Terminus appears. He tells Tyreese, "I told you so," more or less, and ponders what would have happened if Tyreese killed him or he hadn't told Gareth about their presence at all. He ponders the idea of Tyreese not being bitten. Now, Bob appears, saying that getting bitten was what had to happen. The news report comes back on the radio, reporting on fires and violence. The governor, now, talks about "the bill has to be paid. You have to earn your keep," like Tyreese told him. Lizzie and Mika appear, telling Tyreese, "it's better now." The Governor turns into a walker and approaches Tyreese. Tyreese rises to fight him, goes for his hammer, but drops it. He deflects the walker, but gets pinned against a bookcase with the walker's teeth clenching in front of him and then latching onto his arm. Tyreese uses an object from the book case to kill the walker, then collapses and hides under a desk. The walker's blood drips on the picture of a house. It's the clips from the opening scene.

Rick and Michonne discuss making the neighborhood work. Michonne suggests walls built from the trees then leads them down the road. She finds sliced up corpses in the grass beyond a broken wall at the edge of the woods. The three of them look at the corpses and evaluate the walls. Glenn says it doesn't matter if Rick killed Dawn, insinuating she would have died anyway. Michonne brings up Washington and how Eugene chose it for a reason. She suggests the group continues on towards Washington because they might be safe there, which would be better than roaming and just making it. Walkers start to emerge from the woods. Rick agrees to go, it's 100 miles away.

Noah cries out for help. The group hustles to assist. Glenn takes one walker out with a bat. Michonne swings her sword at one, but it has metal sticking out of its shoulder and she can't slice its head off and drops her sword. Rick frees Noah, then aids Michonne and kills the walker.

Beth plays the guitar and sings about love to Tyreese. Sounds of Judith's cry echo to flashes of the prison, Judith, pictures on the wall and sunlight through a window. Tyreese sweats and struggles under the desk. Beth tells Tyreese, "It's okay Tyreese. You gotta know that now." One legged Bob tells Tyreese "It's okay that you didn't want to be a part of it anymore." Martin tells him, "Being part of it is being now." Lizzie and Mika insist it's better now. The Governor tells Tyreese his eyes were open but he didn't want to see and Tyreese still didn't adapt or change. He tells Tyreese it's weak to forgive someone for killing a woman he loved. Bob says, "That's all there is." Tyreese struggles to stand up. The room is filled with dead characters. He says "I knows who I am. I know what happened. You didn't show me s___." He tells the Governor everything that he was is dead, that he forgave Carol because "it's not over." Tyreese continues, "I didn't turn away. I kept listening to the news so I could do what I could to help. I'm not giving up, you hear me? I'm not giving up! People like me… People like me, they can't live. Ain't nobody gotta die today." Tyreese's consciousness fades. The Governor is now in front of projectors with roads on them, he tells Tyreese, "you have to pay the bill," and pushes him down.

Tyreese looks around, life fading from him. Lizzie and Mika raise and evaluate his arm. FLASH to Rick pulling on Tyreese's hand, yelling "Hold it!" Michonne slices his arm off and they carry him out of the neighborhood. They arrive at the gate. Rick and Glenn open the gate and dispense of a hoard incoming walkers. Noah tends to Tyreese as he watches the walkers get picked off. Flash of the little girls appears. Rick helps Tyreese up and carries him out. The memory of Martin flashes, then the church massacre, then the Governor. The group continues to carry Tyreese through the cable in the woods. Back in the room, Bob says, "it went the way it had to, the way it was always going to." Tyreese fades in the woods, but the group carries him back the way they came. They put his helpless body in the truck.

Rick calls Carol with instructions on how to prepare help for Tyreese. The truck is temporarily stuck in the dirt, then gets its footing and launches forward into one of the abandoned cars, which erupts with walker parts. The radio continues with victories by rebel forces and destruction of villages and prisons. Tyreese says to turn it off, Bob turns around from the front seat, and Beth. The girls are sitting beside him, still encouraging that "it's better now." They're ready for him to join them. Tyreese lays with his head on the window, looking at the sun. It's the flash from earlier.

The car stops on the road. Rick, Michonne and Noah get out. Rick pulls Tyreese's now lifeless body out and lays him on the ground. He kneels down to check for a sign of life, then stands up in anger. Tyreese is covered in a sheet.

A shovel digs in the ground. Father Gabriel reads from the Bible. The group surrounds the grave, Tyreese is inside. He's now buried. Sasha pours out one last shovel full of dirt and the group leaves. Rick starts shoveling dirt to fill in Tyreese's grave. Tyreese's hat hangs on a cross made of sticks. Digging sounds play as the end credits roll.

What did you think of tonight's episode? Were you sad to see Tyreese go? What do you think is next for the group?

The Walking Dead: What Happened And What's Going On 5x09 Recap With Spoilers