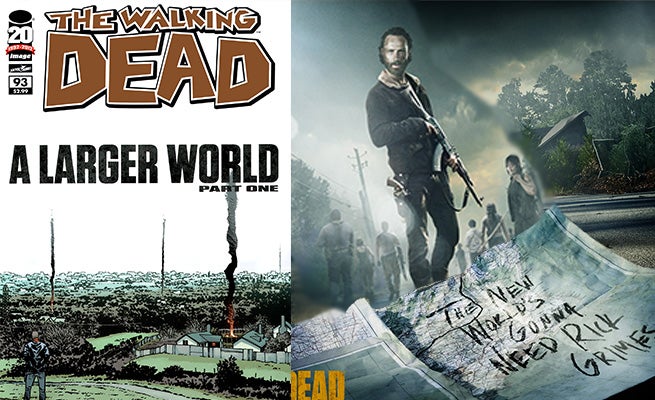 The Walking Dead feels like a completely different show in many aspects now that the group has arrived at the Alexandria Safe-Zone. Let me warn you before you go any further- spoilers follow for The Walking Dead comic series and television if you're not up to date on them.

We've just been introduced to a handful of new characters in the Alexandria Safe-Zone. Most of these characters exist in the comic series, some have been completely fabricated for the show, and one, Deanna Monroe, is a name and gender swap of a major character. The introduction of these characters and the community gives The Walking Dead an entirely new vibe. Most viewers are certainly wondering, "Where do we go from here?" The answer may, in fact, lay in the source material. While I can't guarantee any of this, I can tell you that the series has been following it's comic book roots tighter this year than ever before.

First of all, what happens after the group arrives?

The Safe-Zone is indeed a trustworthy community for the most part. That doesn't mean that human to human conflict isn't going to be present, though, both within the community's walls and from outsiders.

We met Peter Anderson in last week's episode. He was sitting on his porch smoking a cigarette and rudely introduced himself to Rick, acknowledging that his wife, Jessie, cut Rick's hair. Peter is an abusive husband and father who gets extremely jealous. He also happens to be a doctor and a good one at that, which is why Douglas Monroe chooses to overlook what he knows about Peter.

Ultimately, Peter Anderson and Rick come to blows for the first time when Rick goes to Peter's house to find out why he abuses his family. After beating on Peter for a bit and pointing his gun at Douglas, Michonne tells Rick he has to stop. Rick leaves but the beef is not squashed. During the funeral for Scott, who died of infection and was put down by Michonne, Peter shows up with a knife and intentions to kill Rick. Douglas' wife, Regina steps in and tries to tell Peter to stop but in return gets her throat slashed. Spencer, Regina's son tackles Peter to the ground and Rick takes aim with his revolver. After being given permission by Douglas to do so, Rick shoots Peter in the head.

Why is this important? The gun shot tips off the DC Scavengers to the Safe-Zone's location and took an emotional toll on Safe-Zone leader Douglas Monroe.

The DC Scavengers are basically a group of bandits who don't meet the standards of Alexandria's people. They are not "good" people. Think of Alexandria as the "Haves" and the DC Scavengers as the "Have Nots." Like Rick said in his interview with Deanna, people measure you by what they can take from you. The DC Scavengers attack the Safe-Zone, led by their arrogant, fearless leader Derek, who at one point was willing to make one of his cohorts zombie-bait in order to survive himself. They don't last long though. Andrea (who is still alive in the comics) guns Derek down and our group disposes of his bandits.

The combination of the loss of Regina and DC Scavengers attack leads Douglas to deem himself unfit as a leader and he passes the torch to Rick.

The battle with the DC Scavengers was quite noisy. Noise, in a zombie apocalypse, is a bad thing. An enormous herd of roamers hears the battle and flocks to Alexandria. They tear down some of the walls and claim several victims in the Alexandria Safe-Zone including Bruce, Tobin, and Douglas. While Douglas is being devoured, he fires off a bunch of gunshots frantically, one of which hits Carl in the eye and comes out through his temple. It doesn't kill Carl, but he is scarred for life. Morgan, who is with the group at the Safe-Zone at this point, is also bitten in the arm by a roamer, but Michonne cuts it off and tries to save him, but he succumbs to the infection, much like Tyreese did recently on the television series.

Jesus finds the group shortly after the herd of roamers attacks and offers to start trading food and other resources with them. He is from another community called The Hilltop and happens to be a skilled martial artist. He introduces the group to a larger world with several communities who trade with each other, including Ezekial's "Kingdom" and his tiger, Shiva.

Negan is the ruthless, savage leader of a group called the Saviors. He demands resources from the communities we come to know and in exchange he won't kill anyone. Upon his introduction in issue 100, he plays eenie-meenie-minie-mo with Maggie, Carl, Michonne, Glenn and Rick to decide who he will kill with his barbed wire laced baseball which he calls Lucille and insists people treat like a lady. Unfortunately for Glenn, Negan picks him and bashes his head in while all Rick, Maggie, Carl, and Michonne can do is watch. This leads to the All Out War storyline where the communities pool resources and people together in order to launch an assault against Negan and his crew. Luckily for the good guys, a member of Negan's army, Dwight, is a mole working with Rick, Ezekial, and Jesus which not only helps save Rick's life, but leads to the Saviors' demise and Negan's imprisonment.

It's no secret that the show likes to vary things a bit from the comics. For example, in the comics Tyreese got his head cut off by the Governor but in the show it was Hershel. In the comics Andrea is still alive and reliable to protect Rick in the group, but in the show she died at Woodbury.

I think the show has to replace Andrea's role and it will come in the form of multiple characters. I think until now, Carol has played the role of bad-a-- chick who saves everybody, but that is going to be handed over to Sasha. When they arrived at the gate, Sasha was the one Rick turned to to gun down an approaching walker. It seems like they're heading towards having Sasha up in the bell tower, replacing Andrea's role, during the DC Scavenger attack and No Way Out storylines.

To emphasize that bell tower point, let's compare the events of Andrea's in the comics to Sasha's on the television series. Andrea and Dale were closer in the comic series than on television. During the encounter with the Hunters, Dale is the one who delivered the "Tainted meat!" line as the cannibals devoured his leg. Andrea was still shaken up by the loss of Dale and refused to attend a funeral and chose to head to the bell tower, instead. On the show, Sasha recently lost Bob to the tv version of Dale's comic book death. She's a good shot and she's strong, much like comic book Andrea.

In the comics, Andrea is also a love interest of Rick's. I think the television series might change things a bit and escalate the bitter relationship between Rick and Peter by having Jessie Anderson become Rick's love interest because it probably won't be Carol or Sasha.

On top of all of this, I don't think we'll meet Negan this season unless things really start moving quickly. The Rick and Peter drama will unfold, the tv version of the DC Scavengers will attack, and we'll meet tv's Paul "Jesus" Monroe, all before Negan menaces his way into our living rooms. Is it possible we meet him in season 5? Absolutely. I'm just not putting my money on it. My bet is the season ends with the introduction of Jesus and news of a larger world.

The Walking Dead: What's Next According To The Comics?