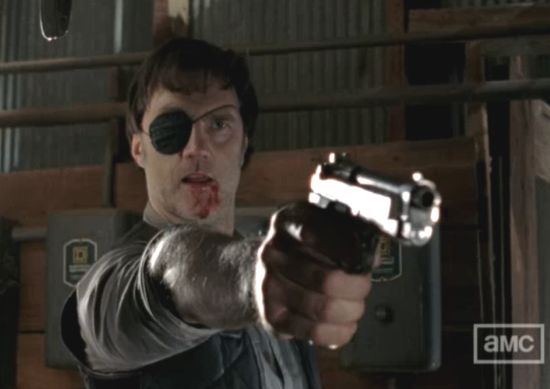 We're four episodes into The Walking Dead Season 4 and there's still no sign of The Governor. In fact, The Governor's been gone so long that even Michonne has decided to give up looking for him. In a new interview with The Hollywood Reporter, Robert Kirkman addressed the lack of The Governor in Season 4 so far. It turns out that new showrunner Scott Gimple was sick of The Governor. Not as a criticism of David Morrissey or the character in general, but just because he felt the character needed a break. Kirkman points out that if they had introduced The Governor in the early episodes of Season 4, then it would have seemed like a retread of Season 3. The writing staff wanted to give Rick's groups some new threats to deal with for awhile to change things up. As far as when The Governor will return, Kirkman teased, "We like to keep people guessing, and he definitely will return this season. Just when you think things are getting to a breaking point, that's when the Governor layer will be thrown in to make things that much more deadly and dangerous. It's going to be a really big, memorable moment in the show." Gimple also added, "What the Governor has done weighs upon him; that is the first time he has done something like that. When the Governor comes back, it's going to be in a very significant way but in a way that we significantly exploit the character and go even deeper into who he is." There has been talk that The Governor will get two standalone episodes during Season 4, which will likely provide some details on what he's been up to.

The Walking Dead: Where Has The Governor Been?