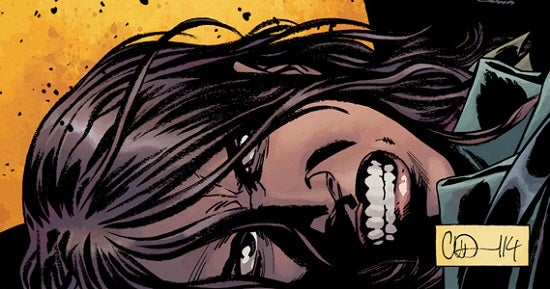 On June 11, Image Comics and Skybound Entertainment will release The Walking Dead #128, which features the cover below, starring the woman seen above. That appears to be the same woman from The Walking Dead #127, and besides the fact that it seems to confirm earlier reports that The Walking Dead will continue on a twice-monthly shipping schedule for the time being (with inkers on interior art rather than Charlie Adlard resuming to inking his own pencils and going back to monthly as previously reported), it raises the same question that her appearance and "new beginning" solicitation text did in May's #127: Who is she, and where is Rick Grimes? There are a number of theories as to who she might be -- is it Lily Caul, the Governor's killer, whom she certainly resembles? Is it Dwight's wife Sherry, leading a group of former Saviors in the wake of the "All-Out War?" And, for that matter, where is Rick's group of survivors? It seems that they either all die during the "War" (not likely) or that Kirkman and company have elected to keep the survivors off the cover for the duration of the three-month solicitation window to prevent the ending being spoiled.  If Rick, Carl, Michonne, Andrea, Sophia, Jesus or any of the others manages to make it out alive, though, is it really believable that the book would shift focus to follow this new woman and her group? 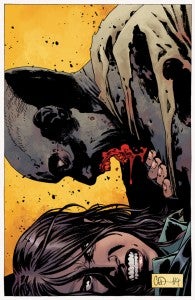 So far, Skybound isn't answering; not only have they posted this cover along with a "who is that mystery woman?" caption to the official website for The Walking Dead comic book series, but their solicitation text, pasted below, is no help, either: THE WALKING DEAD #128 STORY: ROBERT KIRKMAN ART: CHARLIE ADLARD, STEFANO GAUDIANO & CLIFF RATHBURN COVER: CHARLIE ADLARD & DAVE STEWART JUNE 11 32 PAGES/BW/M $2.99 After all this time, she should be more prepared. Prepared for what? Walkers? Certainly it seems as though walkers are taking center stage as a major threat going forward; besides the cover to #128, the #127 cover shows this woman with a group of other survivors seemingly trapped on top of a shipping container, surrounded by the undead. Arguably the most compelling argument made yet as to the woman's identity is that she is in fact the shadowy figure -- already thought to be a woman or a thin/slight man -- who seems poised to kill Negan on the cover of The Walking Dead #126. In spite of swinging Lucille near the hated villain, the shadowy figure seems to be drawing the ire of both Michonne and Carl, ready to fight, which might suggest that s/he is a new or at least unknown quantity. You can check that cover out below. 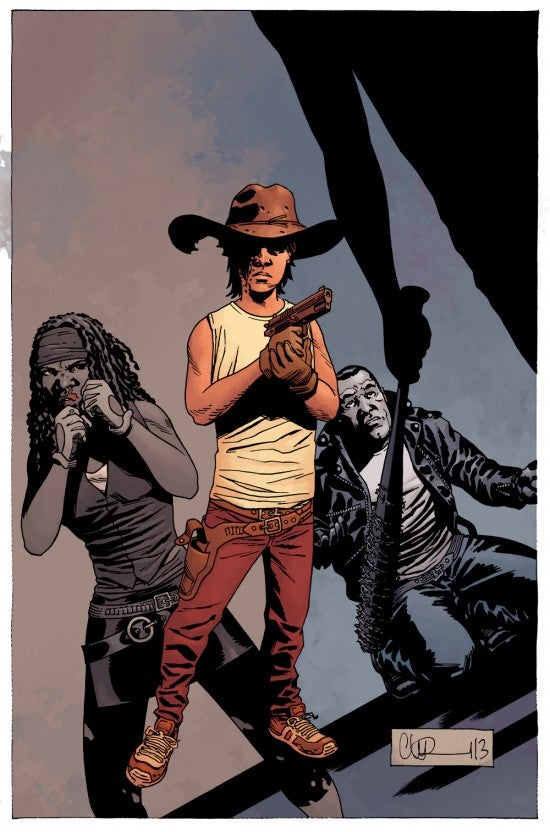 The Walking Dead: Who Is This Mystery Woman and Where Is Rick Grimes?