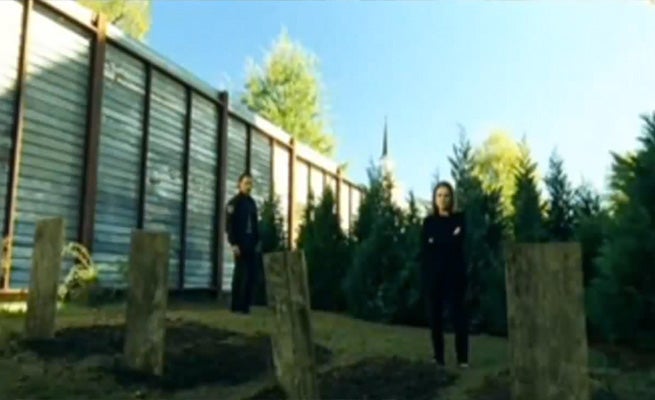 During the preview for this week's episode of The Walking Dead, Try, there was one particular shot of Deanna and Rick standing over four graves. This made us all go wild wondering who is going to be in those graves. Hopefully we find out this week when the 15th episode of season 5 airs on AMC, but until then, I have some ideas.

While it seems obvious that two of the graves would be for Noah and Aiden, if you look at the graveyard, you'll notice that the ground has been removed and replaced as if to typically bury a body. Neither Noah's nor Aiden's bodies were brought back to Alexandria after their deaths. Even if they were to insensibly try and go back for their bodies, there wouldn't be much left, if anything at all, once the walkers were through with them.

I'm assuming, though, that two of the graves represent Noah and Aiden out of respect for them. The Alexandria people haven't changed their lives too drastically since the world went to the gutter, so I would imagine they have held on to standard funeral and burial procedures.

This leaves two graves that viewers have no idea who is inside. While most people I've read tweets or comments from hope that Father Gabriel is inside one, I seriously doubt this one. I'm actually assuming that the other two graves belong to people who died before this episode begins. If this is the case, there are two likely candidates.

The first candidate would be the friend that got killed by a walker which Aiden refers to when he foolishly tried to capture and punish it. Then there's Alexander Davidson. In the comics, Alexander Davidson co-founded the Alexandria Safe-Zone with Douglas Monroe. After a short while, Davidson started showing some symptoms similar to that of the Governor (although not described to be quite as crazy) and Douglas exiled him. Instead of telling this to the community, though, Douglas burnt up a zombie body and told the community it was Davidson's and there is a grave for him, which we have seen. It's also worth noting that Robert Kirkman has confirmed that Davidson is dead, so there's no threat of him returning to the Safe-Zone to wreak havoc.

Now, if the other two graves are for people who have yet to die, we're looking a whole different ball game. The two most likely candidates, in this case, would be Reg (Deanna's husband) and Pete Anderson. In the comics, the Rick and Peter conflict comes to a boil and Pete makes an attempt at taking Rick's life. He fails and ends up killing Regina (Douglas Monroe's wife)), the comic book counterpart to Reg. This makes Douglas give Rick the okay to put Pete down and if it plays out like this in the show, it would make sense for Rick and Deanna to be standing over the graves. It could be Deanna passing the torch to Rick and appointing him leader of the community.

Although, I do believe that the first theory is more likely and the graves are already there prior to the episode's start, it is possible that more characters will meet their demise. Who do you think is buried beneath those graves?

The Walking Dead has 2 episodes left, airing Sundays at 9 PM EST on AMC.

The Walking Dead: Who's In The Four Graves?

New The Lord of the Rings: The Rings of Power TV Spot Debuts