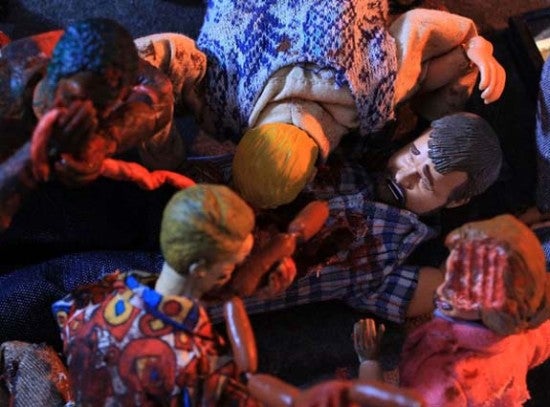 While Stan Lee may have what amounts to a full-time job appearing in movies based on Marvel Comics characters he created or worked on over the years, The Walking Dead creator Robert Kirkman told fans during a Reddit AMA today that they won't see him doing the same. "I hate cameos, they always take me out of movies," Kirkman told a fan who wasked about the prospect. "So no. It's a pet peeve of mine, as much as I like seeing myself, never." Ironically, Kirkman has done a cameo already, in which he was devoured by zombies...just not on his own show. Back in 2012, Kirkman appeared on an episode of Robot Chicken, playing a version of himself who wasn't quite as capable of surviving the zombie apocalypse as he might hope to be. "I know that I come out during some sort of argument and I try to talk about zombies for a little bit, but then I am swiftly eaten and devoured by a bunch of zombies," Kirkman said at the time. "It's not the biggest role and I don't expect to be winning an Emmy anytime soon. But hopefully it will be memorable enough to have a lasting effect in the Robot universe." AMC's The Walking Dead hasn't been averse to cameos, either; they've featured recognizable zombies from horror movies like Dawn of the Dead and An American Werewolf in London as well as celebrities like Pittsburgh Steelers star Hines Ward (who also appeared briefly in The Dark Knight Rises).

The Walking Dead: Why Robert Kirkman Will "Never" Do a Cameo