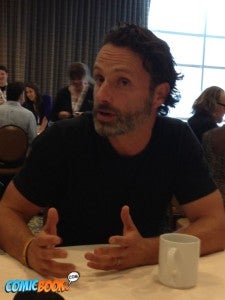 While The Walking Dead is a series that lives by the maxim "no one is safe," and in which loss regularly plays a major role in helping the characters to develop and move forward, last year's biggest loss--original cast member Laurie Holden, who played Andrea--was arguably gone for quite a while before she was ever really gone. During our roundtable with members of the cast and crew of AMC's The Walking Dead at San Diego Comic Con International, series star Andrew Lincoln was asked whether he thought Andrea's death would have the intended effect--and what he said was interesting. "It's a very good point and I think certainly for Rick, it was one of the turning points," said Lincoln, "along with my son becoming a murderer. They're two very important beats that made him rethink his responsibilities as a father but also maybe rethink his whole attitude toward surviving in this world. That's where you arrive certainly in episode one." Executive Producer Gale Anne Hurd added, "Think about it, when you said 'Let the Woodbury-ites stay,' Carl looked at you like, 'No, they're the enemy. We kill the enemy.' That was a really interesting dynamic and for Rick especially." Lincoln agreed, giving credit for that action to Andrea. "It was a huge call, and especially for someone who has been pushing people away and not trusting," Lincoln said. "For him to say, 'Come in,' Andrea's death must have had a profound impact. She was trying to do what Rick probably would have tried to do two seasons ago; she was trying to unify two groups of warring people."