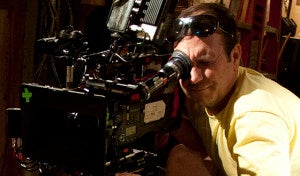 Mike Satrazemis, director of photography for AMC's The Walking Dead, told the network in a recent interview that he relies not only on the Robert Kirkman/Charlie Adlard comic book series for visual inspiration, but also on The Crow, a comic book movie on which Satrazemis worked. "We always try to find graphic frames, like close-ups with a wider lens," Satrazemis told AMC. "There's a lot of references in the way we frame things. And as far as lighting, I'm trying to go a lot darker than the comic books. A lot of the show is set in the daytime, it doesn't mean that it has to be a bright sunny day everywhere. There are very few bright sunny days for our characters." That's a very cinematic way of doing things, in general; TV (especially until recently) typically is brighter and more fully-lit than movies. Asked whether there were any other direct visual influences that impact the look of The Walking Dead, Satrazemski cited another comic book project: "I worked on The Crow, and there are a lot of movies that you can draw from," Satrazemis said. "But to me, Nicotero set up a palate… from the beginning. There are a lot of things we've been given from the beginning and it's hard to change something when you've been a part of the way it was — and the way it's been working — since the beginning. That's what you draw from. We created a bubble that we kind of leave open."

The Walking Dead's Director of Photography Cites The Comics, The Crow As Visual Inspiration