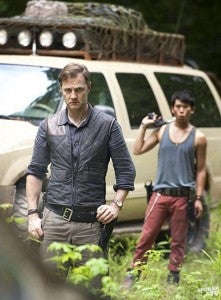 AMC's ratings juggernaut The Walking Dead has been in production for a few weeks, but other than the odd set diary and a single photo each of Rick Grimes and Michonne, fans hadn't seen much from the set thus far. Well, today that changes in a big, dramatic way with a set photo that gives viewers their first look at The Governor! Played by David Morrison, The Governor is the most evil, sadistic character the survivors have ever encountered in Robert Kirkman and Charlie Adlard's Walking Dead comics. He's essentially pure evil, a dramatic shift from Shane Walsh, who was last year's "big bad" but not actually bad when you got right down to it, just unstable--something that can be excused in a world where even the best people are a little crazy. The Governor first appeared in The Walking Dead #27 and was a primary antagonist to the survivors for more than twenty issues before he was ousted from the series in an unprecedented blaze of glory. In the series, he's played by David Morrissey, who beat out a number of other actors for the role.

The Walking Dead's Governor Appears in the Flesh