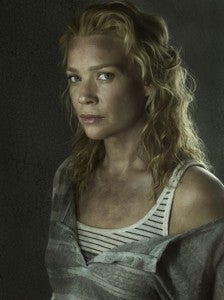 Emmy Award-winning special effects guru Greg Nicotero told The Hollywood Reporter today that the second half of The Walking Dead's third season will be Andrea-heavy and that "we'll probably end our season minus a cast member or two." "We've established a certain scenario on our show where nobody is safe," Nicotero said, "and certainly in the back-half of our season, it doesn't get easy for anybody," he told reporters at the Golden Globes. "We have the whole Woodbury community with the Governor and our principal cast. We'll probably end our season minus a castmember or two." Nicotero told the magazine, "It's very possible there might be another attack on Woodbury. The beauty is you're not confined to one location, even though we spend a lot of our season at Woodbury or the prison. The bottom line is that we've established the conflict between the Governor and Rick, and we'll explore that a lot more in the second half." They've also established a new status quo for Andrea, who now realizes that her boyfriend has declared war on literally the only friends she has left in the world. "Andrea's eyes are now opening; she had no idea that Rick and the others were still alive. Now she's learning that the group is not only alive but that one of her friends has been captured by the man she's been romantically involved with. Her head is exploding," star Laurie Holden, who plays the character, told THR. "It will be interesting to see if Philip listens to Andrea or not -- there's going to be a real redefinition of the Governor to Andrea in the second part of the season....It's fair to say that the Governor the audience knows will now be revealed to Andrea."