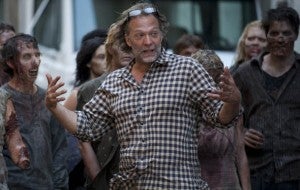 In a new interview with AMC's blog, The Walking Dead's Co-Executive Producer/Special Effects Make-Up Designer  Greg Nicotero, a legend in the world of horror effects long before he came to the zombie drama, spoke about making the move to being a director, as well as his plans to finally appear onscreen as a zombie in the show's third season. You can check out a transcript below, courtesy AMC. From Day 1, everyone has been excited to get to the prison. Now that you're there, does it live up to its expectations? The prison is certainly the beacon for things to come. When you reach that milestone, we know we've turned a corner and now we know that different and bigger things are coming. It's like watching Jaws and seeing the little yellow barrel and saying, "OK, that's the yellow barrel, so I know the shark is somewhere around here." It's just a question of when he's going to surface. You're now directing your second The Walking Dead episode after last season's"Judge, Jury, Executioner." What can you tell us about it? I tend to get these really good dramatic bits in my episodes... I got the script and I read it and it's huge. Every single character in the show has something to do, something to say and there are great dramatic moments. I also had several key moments from the graphic novel that fans will recognize that I had to establish and set up in Episode 5 that will play out through the rest of the season. And then there's a lot more zombie action in my episode. Actually there's a lot more zombie action in every episode this season. Tell us about the zombie decomposition that's happening in Season 3. How are you changing the ways the zombies are portrayed from season to season? Well one thing I always think about and the rest of the crew can attest to is just how grueling the weather is in Georgia. The sun literally will bake you if you stand out in the sun too long. And one day I'm thinking about it and I'm like, "OK, what would happen to these creatures that have no actual ability to protect themselves from the elements?" So you can only imagine how horrible the smell would be, and what we felt it was important to play up is the idea that these things are becoming dried up and disintegrated and leathery. We heard there's an animatronic zombie in Season 3. Can you tell us anything about it? The way that they work is the eyes and the jaw are operated via radio control and the neck mechanism is operated by a little handle that comes out of the bottom of the puppet so you can get side to side and up and down neck movements via puppeteering it below frame. So the beauty of that is that you can have it standing there amongst people in makeup and you'll probably pan across it and say, "Wait a minute. How is that thing moving?" What new tricks have you come up with for the zombie makeups this year? We've been able to do a lot more full-body prosthetics. One thing that I wanted to allow for in Season 3 was, you know, rotted chests and rotted backs. So we sculpted male and female rotted torsos that get glued directly to the performers. And one of the ideas we like playing up was that the walkers, because they are rotting and decomposed, is that they're sort of putrefying -- so if you come in contact with any of them and you slash at them, parts of them might sort of liquefy and come off. What can you tell us about Michonne's pets? What's unique about them? They're missing their arms, their jaws and their teeth... We actually sculpted the front of the walkers' faces out about an inch and a half, so when you see the walkers on camera, those are not their real eyes -- those are glass eyes that are built into the prosthetic. But by building the prosthetic piece out, we were able to deemphasize their real chin, which was covered under the foam latex piece, so you could stand on set and look at their faces and not see their chin, as if their entire jawbone was torn out. It was a really good marriage of a practical prosthetic face, prosthetics on the body and then the visual effects that erased the arms. It's pretty amazing In Season 1 you played several zombies, whereas in Season 2 you played not a one. Will you be playing any zombies this Season? I had a prosthetic all set for me for Season 2 -- I was going to be the zombie that bit Patricia (Jane McNeill) in the last episode. But that was our last of shooting and it just got to the point where I literally couldn't afford the two hours to reset, go to the makeup trailer, get made up and come back. But I have plans for Season 3. I've just got to find the right one.