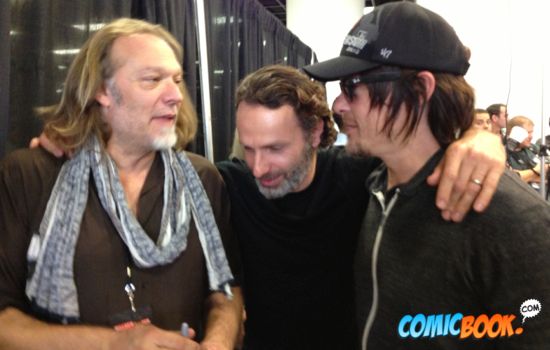 At Walker Stalker Con this past weekend, Walking Dead executive producer Greg Nicotero revealed that they were currently shooting their second to last episode for Season 4. "We're almost done for Season 4," said Nicotero. "It's kind of a little bit of a blur right now." "This season especially I think that we've dedicated more beats to the graphic novel than we have in the last two seasons," revealed Nicotero. "Scott Gimple loves the comic book. He's really, really dedicated to it. You know, we've sort of changed scenarios. Things that happen to one character in the comic book happen to a different character on the show. Because we don't want it to just be a carbon copy, otherwise everybody would know what's going to happen." Nicotero added, "This season is a lot darker than we've gone in the past. The first episode where everything's kind of, you know, the prison's going on fine. They've got a community, and things seem to be working out. You know when Michonne jokes with Rick, and Carol calls Daryl 'pookie,' and he goes 'pffth' and all that. Those moments were there for a reason, because now that the crap has hit the fan, it's a little harder. This season is definitely darker." The Walking Dead Season 4 is currently airing on Sunday nights at 9 PM ET on AMC.