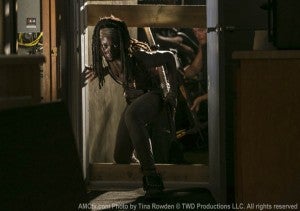 During an interview with the Los Angeles Times's Hero Complex Blog earlier today, The Walking Dead showrunner Glen Mazzara said that just because the show had stopped short of having the Governor sexually assault Maggie in last week's episode doesn't necessarily mean that his rape of Michonne, which happened in the comic books, is totally off the table. That said, Mazzara still sounded skeptical that it could happen on the show. "That Michonne rape story is a huge part of this comic book, and I know that the audience has a lot of expectation about that," Mazzara said. "I feel that if the Governor is just the type of villain that is mutilating and raping people when we first meet him that he'll be branded as an arch-villain, he may not feel as human. He'll just feel like an evil presence without any humanity in him, that's something that David Morrissey and I are not interested in doing. We really want to show that this is a fully realized person who makes evil choices. That's interesting. The other thing is that if he comes out and he brutally rapes people right at the beginning, and our characters don't punish or eliminate him, they will look ineffective. We have to take our time and tell this story. What you see is a man making a choice to sexually threaten a woman to get information. He's rendering her powerless, he's humiliating her, simply to get information. When he finds out that that won't work, when she surprises him and says, "Do what you're going to do and go to hell," he says I need a different tack. He's not just into torture for torture's sake. He wants the information. Now at the end of the mid-season finale, we know what he's capable of just to get information — imagine what he'll do if he wants to exact revenge. That scene in Episode 7 plants a seed of who this character is, what he's capable of. I don't think that's our version of the rape story. I think that's the seed of a larger story to be told with this character." He added, "Without a doubt, it could still happen or it could happen with somebody else. Nothing is off the table. These are long-running characters and there's a long-running story to be told but it needs to be told sensitively, realistically, intelligently and respectfully." Mazzara also suggested that even if the story were to take place, it might not happen the way fans expect it to, or on the same timetable. Check out this excerpt directly from the interview:

HC: But you're not necessarily saying it would happen this season. GM: Not necessarily in this season and who knows if we would ever do that story or not. I don't want to say that. I'm saying that I feel that that story is such a significant story, it cannot just be burned off. It will feel gratuitous, it will feel shocking, I think it would alienate the audience. It needs to be handled very, very carefully. I would say that that Michonne rape story is one of the most sensitive issues I've ever handled in my career as a writer, and it needs to be done right. It can't just be thrown at the audience for shock value, I think that would be irresponsible as an artist to do that on TV. It may work in a film, it may work in a novel, it may work in a comic book. I didn't feel it would work in that situation on a TV show.

Fans of the series may not be thrilled to hear that Mazzara doesn't think The Walking Dead is a show that transcends those kinds of rules and becomes more than just "a TV show," but there weren't a whole lot of people eagerly looking forward to a fan-favorite character being brutally tortured and raped onscreen so it's hard to tell whether anyone will miss it if it turns out not to happen. That said, it's still TV--and not even premium, pay cable. A lot of people wondered how or if The Walking Dead would try and get away with some of the things on TV that Robert Kirkman and Charlie Adlard have done in the comics...and Mazzara expressing doubt not just about Michonne's rape but also about the death of Baby Judith (which he intimated was just too dark for his show) might have finally shown us the line in the sand that Mazzara and AMC have elected to draw even while having a show that's more "extreme" and unpredictable than most of what's on TV.