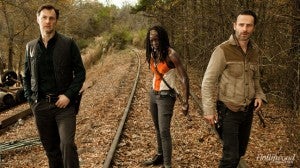 Sure, this isn't official, and it isn't particularly new, but last week when Glee co-opted Jonathan Coulton's arrangement of Sir Mix-A-Lot's "Baby Got Back," telling him when he questioned it that he should simply be glad for the attention the controversy was bringing him, we got to thinking: If he wanted attention from his work appearing on a TV series, surely there has to be a better choice, right? Like, say, the top-rated show of the Fall 2012 season? Check out a fan-made video below that puts Coulton's RE: Your Brains to a series of images from AMC's The Walking Dead. It's good for at least a chuckle and in this case, the unauthorized use is at least accompanied by a disclaimer that the uploader claims no credit for the song.