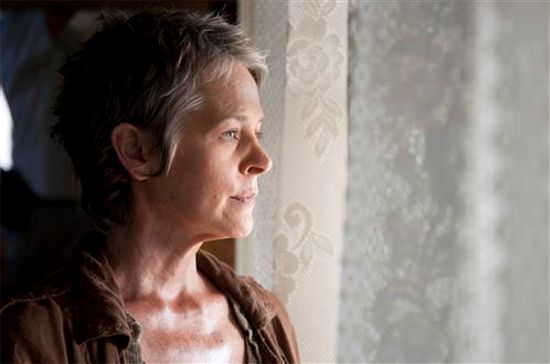 For the most part, television award shows have overlooked AMC's popular The Walking Dead TV series. It's a shame, because the show has included some outstanding performances. During Season 4 of The Walking Dead, one particular cast member had a breakout season, delivering her best performances on the series. And it looks like the television awards shows are finally taking notice. The Broadcast Television Journalists Association today announced the nominations for the 4th annual Critics' Choice Television Awards. Mixed in with all The Big Bang Theory, Game of Thrones, and True Detective nominations was a nomination for The Walking Dead's Melissa McBride. McBride was nominated in the Best Supporting Actress in a Drama Series category. Other nominees in the category include Christine Baranski, The Good Wife (CBS); Anna Gunn, Breaking Bad (AMC); Annet Mahendru, The Americans (FX); Maggie Siff, Sons of Anarchy (FX); and Bellamy Young, Scandal (ABC). The 4th annual Critics' Choice Television Awards will be broadcast live on The CW from the Beverly Hilton Hotel on Thursday, June 19, 2014  starting at 8 PM ET.