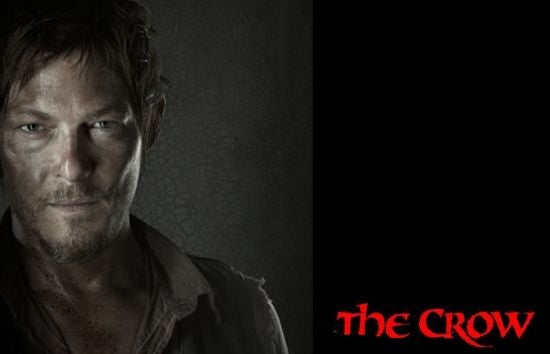 Last we heard about The Crow reboot, Luke Evans had been cast in the lead role. However, it's unclear if Evans is still part of the film or not. According to a report on Schmoes Know, Norman Reedus, who plays Daryl Dixon on The Walking Dead, is now the top choice to play a character named James in The Crow reboot. Schmoes Know is a little unclear on exactly who James is supposed to be. Eric Draven is the lead character who turns into The Crow, and Luke Evans was supposed to be Draven. Schmoes Know is speculating that Norman Reedus has the lead role, which means either the lead character's name is being changed or James is just a code name being used. Schmoes Know is also reporting that Kristen Stewart was being considered for the role of Shelley, but the studio and producers passed on her because they felt that she wouldn't attract an audience. We assume that they mean she wouldn't attract the type of audience that follows The Crow, since Stewart does have a pretty large fan following. It actually matches up with something that The Crow creator James O'Barr told Comicbook.com at Fandomfest in July. O'Barr said, "Initially, I think they were trying for the Twilight crowd, and I said, 'If you want to go for a PG-13 film that's geared toward 14 year olds, I'm going to leave right now.'" O'Barr also told us that The Crow reboot was supposed to start filming in January, 2014. O'Barr stressed that the film would not be a remake of the Brandon Lee film. "We're going back to the book, and we're going to do like a straight adaptation of the book. So it really has nothing to do with the Brandon Lee film, other than they are based on the same source material. So it's like the Bela Lugosi Dracula versus the Francis Ford Coppola Dracula, two entirely different films, just the same source material," said O'Barr.