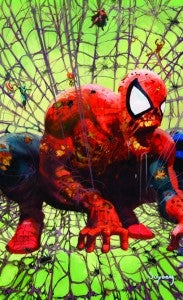 Norman Reedus, star of AMC's The Walking Dead, was asked by MTV Geek to chime in on what appeals to him about Spider-Man, and discussed the character in the video embedded below. Saying that he loves Andrew Garfield as Peter Parker because the actor brings the "loosey-goosey" feel of The Electric Company back to Spider-Man, Reedus was asked whether Spider-Man could defeat zombies. "The thing about zombies is that they just keep coming. So if he can shoot a web that can stick them to something and they can't get out, then he's golden," Reedus said.