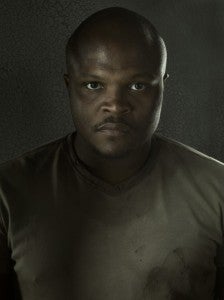 Just in time for Christmas, actor IronE Singleton, who played T-Dog on The Walking Dead until his character was written off the show earlier this year, has made his "Walking Dead rap" available to download via his website. Titled "We Are The Walking Dead," Singleton talked about the song in an AMC interview earlier today and several fans in the comments thread and on Twitter asked where they could hear it. We've embedded Singleton's media player below so that you can check it out here. Singleton, an Atlanta native, apparently performed it for cast, crew and friends at a Walking Dead screening party at his home when the season began. "I had a screening with people here at the house. We had 150 people here, so you know I was excited. My wife did a terrific job of putting things together -- she handles all of that stuff. My job was just to post when they got here and do my Walking Dead song," the actor told AMC. "It's my version of what a zombie would talk about if a zombie could talk. I'm rapping. And the beat is so hot!" Singleton isn't the first cast member on The Walking Dead to release a single this season; earlier in the year, Singleton's co-stars Emily Kinney and Lauren Cohan made their "The Parting Glass" (as heard around the campfire on AMC's The Walking Dead) available for download at iTunes. T-Dog's rap was never all that likely to find its way into the actual series, though, given its humorous nature. Although one never knows--Singleton did hint he'd be open to coming back as a zombie to perform it.

The Walking Dead's T-Dog Has a Zombie Rap For You