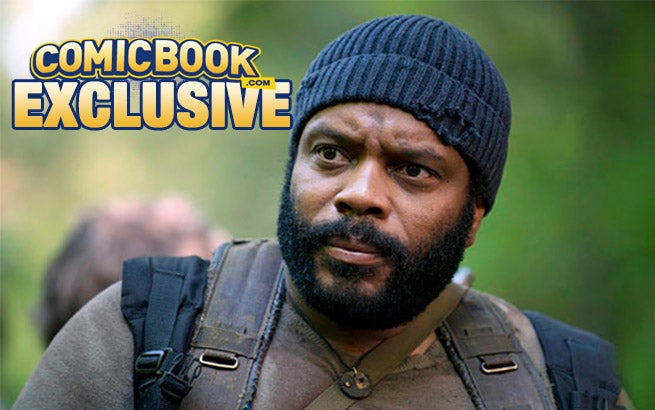 Fans of The Walking Dead are as hungry for the show's return as it's walkers are for human flesh. ComicBook.com reached out to Chad L. Coleman who plays Tyreese on the AMC zombie hit to talk about working on the show. Chad agreed to an exclusive interview this week, just before the show's return.

When I was still in college, my roommate and I would often times compare Tyreese to Drake. Drake can be this hard guy but sometimes he can go a little soft. So, we would argue… If you were a rapper, who would you be?

Okay! Well, thank you for settling that debate.

You gotta find another word, though! Soft is not the word.

You're right. I'd say moral compass is more like it.

Yeah. You know what I mean? That's a really important quality in a human being. If you don't have any level of sensitivity or empathy… I guarantee if you're a father with no empathy and you can't relate to your daughter on any level other than, "I'll smash your head in," I can promise you, you won't have a fruitful relationship with your child. And I can promise you that for a woman, that's a part of the relationship with them, too. They need a little warm and fuzzy.

I've read some of it. Not all of it. You know, there were so many volumes by the time we got started. It can get distracting.

Were you ever worried they were going to cut off your head?

Initially, but then I saw them give my death to Hershel.

So, you were kind of relieved?

No, you know, it was a two-fold thing. I was incredibly sad because I didn't want Scott to go, but I also knew, well, I'm not gonna die that way!

That's true. You said you didn't want to see Scott go. It looks like you guys are like, this, tight-knit family on set. Are they any jokesters or pranksters on set?

Not like pranks, but we talk s— to each other all the time. We're always joking on each other. Reedus might get a littler prankster-ish, you know? But for the most part we just talk a lot of junk to each other. It's like dudes sitting' around on the porch, playing jokes on each other.

It's probably a lot of fun, huh?

Oh, it is. A bunch of people have a wicked sense of humor on this show.

Do you think there are any similarities from Chad Coleman to Tyreese?

Oh, yeah, definitely. Most definitely. I'm a good guy, most people always talk about "He's really nice." And I have the physical prowess to take care of business. I like to think through things and look before I leap. I lost my love interest, I've certainly loved a lady. Think about, you know, a piano has no personality except fore the keys. We are the instrument. Anything you do as an actor, a part of that is a part of me. You can't completely separate it, you know? I'm in the art of human behavior. You see the note, 9 times out of 10, I'll play that note in life somewhere.

You mention losing your love… Do you think Tyreese has actually forgiven Carol for killing Karen or do you think he still holds on to that?

I think people think forgiveness is one time, but it's not. You keep forgiving. It's fluid. You wake up, you know, one day you feel great, like "Yeah, alright, that time is behind me, I'm okay with it." The next day you're not okay with it. So, you have to take the words you said and be willing to live by that. That's the thing I think people are most confused by, thinking you say it once and you're all good with it. You have to keep reminding yourself, keep fighting those feelings, keep fighting not to judge, keep fighting not to get physically violent with that person. You have to keep working at that yourself.

Are there ever accidents on set? I mean, I know you're swinging a hammer around and most of the time these walkers are people dressed up in make-up, so does anything ever happen or go wrong?

The thing that happened for me was the scene in the cabin with Chris Coy. When I was saying, "I won't, I won't," and I was pounding him, it was so weird because, you know, the adrenaline got up, and we get it, we're like, "that's great, that's great." I was thinking about one time I was on Criminal Minds and Shemar Moore had a scene like that with me. And so I told Chris that, and I said, "Yeah, Chris he clipped me man, and I didn't say nothing, I just went and told the stage managers to tell him to make sure he made eye contact with me so we stay safe," and Chris goes, "Chad, you know you clipped me!" I'm like, "Oh! Shoot!" He said, "Don't worry about it, don't worry about it." I said, "Man, I'm sorry," but that's how gone I was.

You were swinging hard!

I didn't know I clipped him! I'm sitting here telling him a story about that scene in Criminal Minds when me and Shemar Moore had that scene. He was just like me, you know? You just keep moving, you keep soldiering along.

No, no, no! And it's hard because you've really gotta tell that story.

Well, compliments to you. I've been watching from the beginning and you've done a great job as Tyreese.

But, we are ComicBook.com, so I have to ask: What super hero would you play, if you could play any super hero in a big blockbuster super hero movie?

Well… I don't want to say it anymore now 'cause it ain't gonna happen but, you know… Luke Cage!

Awe, man! I was rooting for that. I wanted to see you get that role.

Well, now, it's like… Back in the day I was a huge Iron Man fan because I could always draw him. There's so many of them. I used to love the Incredible Hulk. I used to love Captain America. I don't know who else is out there that I would have an opportunity to play, but hey, you come up with it, I'll take it on!

Well, maybe one of our fans will come up with something! They tend to come up with theories and fan casts that explode. So, when we do I'll share it with you.

There's no doubt Chad L. Coleman is fantastic as Tyreese, but what super hero would you like to see him play? Sound off in the comment section below!

The Walking Dead returns this Sunday, February 8, on AMC.