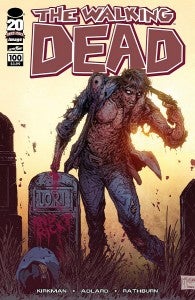 Comic book legend Todd McFarlane, co-founder of Image Comics, the publisher where The Walking Dead made its home, will appear on Talking Dead this weekend to discuss the forthcoming episode of AMC's The Walking Dead, titled "Prey." McFarlane, whose toy and collectible company has made action figures and statues based on the comics and TV series, announced the news today via his Twitter account, telling The Walking Dead fans to be on the lookout for him during the weekly postgame series that features the show's stars and executives along with celebrity fans. McFarlane's most recent line of action figures include Merle Dixon, Michonne and others. He also provided one of the many variant covers for The Walking Dead #100.

Todd McFarlane Will Appear on Talking Dead This Week