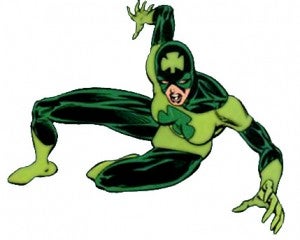 Happy St. Patrick's Day, all! It seemed to us for some reason that today would be an ideal time to take a look at some of our all-time favorite Irish superheroes. There aren't frankly all that many A-list Irish superheroes, but when we went to make a top five, we did realize that there were too many to be comfortable leaving one off. And bear in mind that while we love all of these characters, some of them aren't meant to reflect on the values and culture of their native land. This first fellow, for instance... 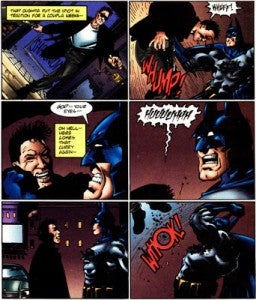 Hitman Garth Ennis and John McCrea worked to craft one of the most hilarious and bizarre DC Comics titles in years. Hitman is a character who fought zombie penguins at the Gotham City Zoo, threw up on Batman, and tried out for the Justice League (even though he knew he had no chance of getting in) just so he could use his X-ray vision on Wonder Woman's costume. Yep, that's our Tommy. Don't expect to see this character turning up in the New 52 anytime soon; he's a bit too fun for the current editorial mindset at Marvel and DC--and anyway, his backstory is dependent on Bloodlines, a crossover event so bad that except losing Tommy, almost nothing bad could possibly come from just retconning it out of the New 52's history books. He also has the most bizarre and irreverent superheroic team of allies this side of Kick-Ass; Section 8, a team whose members include Six Pack (whose power is alcoholism), The Defenestrator (who carries around a window through which he throws evildoers) and Dogwelder (who, yes, welds dead dogs to villains). And you thought your friends were weird on St. Patrick's Day. 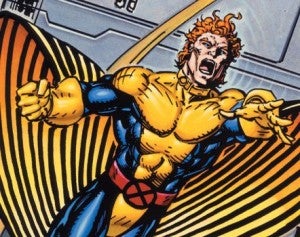 Banshee Banshee has to make the list, right? I mean, he's the most Irish of all the Irish superheroes. The only comic book character with more Irish in him that I can even think of is Cassidy from Preacher, and that old vampire would be stretching pretty hard to call him a hero of any type. He's also got a red-haired firebrand of a daughter named Siren. Of course, both of them tend to fall into generic Irish stereotypes from time to time, but that's less common nowadays than it used to be. Spider-Man 2099 Here's a guy we'll be hearing more from soon! Miguel O'Hara is supposedly going to be turning up again in the not-too-distant future at Marvel Comics, which is pretty cool because Spidey was one of the few 2099 titles that really worked. It also had, hands-down, the coolest costume redesign of that publishing line. 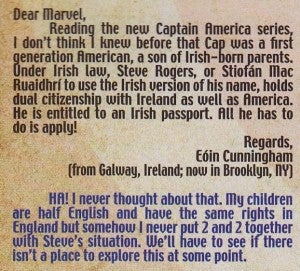 Captain America His Irish heritage has come to be more of a subject of conversation of late, as Steve Rogers--the child of Irish immigrants--was "revealed" in the letter column of the series to have (or at least be eligible for) dual citizenship. That should have come in handy back in the '90s when Clinton stripped him of his U.S. citizenship in "Man Without a Country," which was about...well, just what it says on the label. Daredevil I don't really think of this character's Irish heritage as being that important, but the fact that it's established is enough to land a character as significant as Daredevil a spot on the list. And he does it all without the use of his eyes! 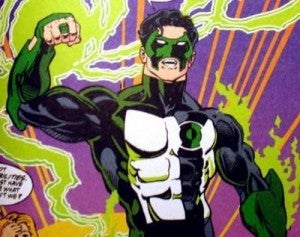 Kyle Rayner After Hal Jordan went nutty and Kyle Rayner stepped in, Green Lantern abandoned most of the green on his uniform. They replaced it, though, in his eyes and apparently his heritage. Mama Rayner actually pressured Kyle to learn Gaelic. Maura Rayner, his mother, had a name that just begged to have its Irish explored...and that had to play a big role in Kyle's upbringing since his dad was basically MIA his whole life. The Irredeemable Ant-Man Eric O'Grady is another hero who, like Tommy Monaghan, can arguably be considered an antihero at best and a menace to society at worst. But he saved the world a few times, worked for the Avengers initiative and died honorably so we'll let him have it. Prior to The Walking Dead becoming a massive cross-media success, Robert Kirkman's most notable accomplishment as a comic book writer was arguably writing an Ant-Man series that people actually enjoyed. The crass, self-centered S.H.I.E.L.D. agent at the heart of The Irredeemable Ant-Man really was the everyman superhero--not like Peter Parker, who had a fairly average life before he got the powers but then immediately knew the right thing to do in any circumstance. No, Eric O'Grady was more like that creepy guy from your high school who found a flare gun and just wanted to shoot it off in the bathroom. With great power comes--holy crap, watch out! Ant-Man's hiding on your showerhead watching you clean up! The Gay Ghost/Grim Ghost Really it's just the name. You can't beat The Gay Ghost. 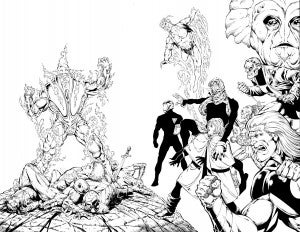 Hellstrike Here's a character who'll be showing up in the New 52 for the first time soon, so who knows how much of his backstory (including even his heritage) will remain in place. But while you're waiting for Jim Starlin to take over Stormwatch and bring the old band back together, here's what Wikipedia has to say about Hellstrike: "Nigel was born Irish in Belfast. He served in the British police constabulary in Belfast for some years before moving to London. There, he fell in love with Anne, his partner while investigating the IRA. Their relationship lasted until an Irish terrorist/mercenary by the name of Seamus O'Brien, killed her in front of him. In the ensuing fight, Keane was mortally wounded. But before dying, his powers manifested, saving his life and making him Hellstrike" Jack O'Lantern The Irish representative to the proto-Justice League International group known as the Global Guardians, he may be appearing again soon in the New 52 as well, considering the last we saw a number of the JLI members they had splintered off to form the Guardians in the new DC Universe.