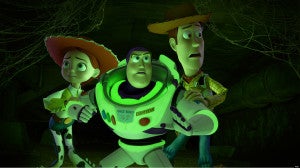 Buzz, Woody and the crew are back for Pixar's first-ever TV special, Toy Story of Terror. Hitting screens on October 16, the special will follow the characters from the Toy Story franchise to a haunted hotel, where...well, you can check it out embedded below. With both The Good Dinosaur and Finding Dory being delayed earlier today, 2014 will be the first year in nearly a decade when no new Pixar film came out. That, coupled with the relatively disappointing performance of Brave, probably puts some pressure on established hits like the Toy Story, Monsters Inc. and Finding Nemo brands to generate some buzz and, potentially, merchandise to carry the Pixar division through 2014.

'Toy Story of TERROR!' First Look: Woody And Buzz Are Back For Halloween
Start the Conversation