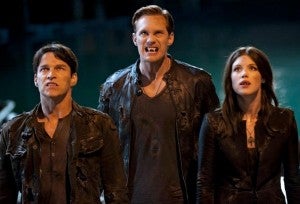 will, after packing some smaller rooms to capacity in recent years, finally make its way to San Diego Comic-Con International's coveted Hall H on Friday of this year's show, according to a report at Collider. The article suggests that, in addition to Game of Thrones and The Big Bang Theory, a number of other TV series could find their way to the massive auditorium this year, pointing out that The Walking Dead would certainly have the appeal to fill the room. True Blood's panel will reportedly take place the same day, in Ballroom 20 at the San Diego Comic-Con, according to the same report. ComicBook.com will be in San Diego for Comic-Con International on July 11-15, so expect more coverage of these and all the other panels coming out of the show.