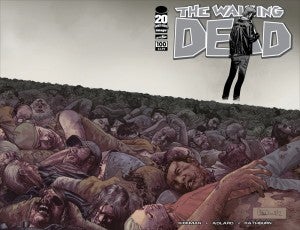 Image founding partners Todd McFarlane and Marc Silvestri are among five artists who will do variant covers for the 100th issue of Robert Kirkman and Charlie Adlard's The Walking Dead, according to a Bleeding Cool report. In addition to the moody wraparound cover by series artist Charlie Adlard, first seen yesterday, there will reportedly be as many as eight other covers, including a chromium-enhanced version of Adlard's cover (hello, nineties!) and variants by McFarlane, Silvestri, Frank Quitely, Bryan Hitch, Sean Phillips and Ryan Ottley. In addition to spawning a smash-hit television series that nearly won Hulu's Best in Show this year, Kirkman's zombei apocalypse series is only the fifth Image title to pass 100 issues, and every previous title (Spawn, Savage Dragon, Witchblade and The Darkness) to do so was the product of one of Image's seven original founders, who were famous by the time their first issues hit the stands. It's only the second of those titles still written by its original creator (the first being Erik Larsen on Savage Dragon, who also draws that book). Myself, I'm holding out for the Tony Moore variant. I hear he sketched it on the reverse side of a subpoena.

Walking Dead #100 to Get at Least Five Variant Covers

Supergirl's Chyler Leigh on Alex's Relationship With Batwoman in The Flash: Armageddon