Tim Seeley and Mike Norton's Revival #1 is due on the stands in July, and while they've got very different takes on what happens after the dead begin to rise, it shares a certain kinship with its Image Comics stablemate The Walking Dead. That's why Robert Kirkman's beloved zombie epic will run a three-page preview of the upcoming tale of rural horror in its 99th issue, due out later this month While the people who return to life in Revival aren't mindless zombies, they aren't themselves either...and when they shamble out of the grave and start acting like everything is just fine, it's not long before the tensions between the living and the undead begin to cause a rift in a small, rural Wisconsin town. And when there's a murder in the community, everything really comes to a head. Seeley and Norton's story had a five-page teaser in Image's Free Comic Book Day offering this year, but the publisher (along with Kirkman's Skybound imprint) is going the extra mile and releasing additional pages for fans to check out in the pages of The Walking Dead. Kirkman has done this before--not only did Image Comics' phenomenal hit Chew run a preview in the pages of The Walking Dead, but recently Terry Moore's Abstract Studios book Rachel Rising ran a five-page preview in the title as well. 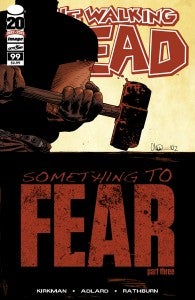