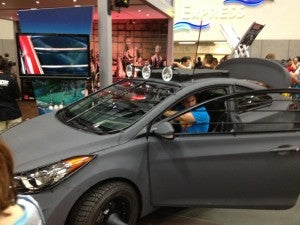 Over at Entertainment Weekly, a contributing writer relates his story of acting as an extra in last year's second season premiere of The Walking Dead. The sequence in which the writer acted, some of the aftermath of which is shown below, revolves around  Rick Grimes' gang of survivors, making their way through Atlanta away from the just-detonated Center for Disease Control, when Shane's car breaks down and he's left to fend for himself on the zombie-ravaged streets. Ultimately, he's (of course) rescued by the rest of the group in the RV, but this whole plot was abandoned later, opting instead for beginning the season after the survivors had already left Atlanta. It's really no wonder they get swarmed--not only was there a massive explosion, but then a flurry of gunshots. As we discovered often in the show's second season, making a lot of noise is one of the surest ways to draw the attention of walkers. In any event, this scene and more will be available in three weeks when the second season of The Walking Dead hits Blu-Ray, but this one in particular is interesting as that alternate opening sequence to the season would address one of the lingering questions that fans had about the beginning of last season (to wit, what exactly happened to allow them to safely get out of the city following the explosion at the CDC). One has to wonder, too, whether Shane was already driving his Hyundai at the time. Could it be that he didn't end up breaking down in the premiere because of the importance and omnipresence of that particular piece of product placement, which was responsible for a number of promotions last season?