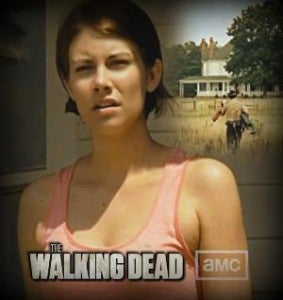 It should come as no surprise to readers of Robert Kirkman's Image/Skybound comic The Walking Dead that Lauren Cohan, who plays Maggie Greene on the AMC Television adaptation of the series, has been promoted to "series regular," meaning essentially that we'll see a lot more of her in season three. TV Line exclusively broke the news less than half an hour ago, with producer Glen Mazzara taking the news to Twitter moments later. A character who lives on in the comics and is love interest to Glenn, one of the most beloved characters on the series, Maggie would seem to have a pretty clear path to the finish line--but when it comes to the show, TV Line's Michael Ausiello said it best: "While the promotion would seem to indicate that Glenn's sweetheart will figure prominently in the show's upcoming third season, it by no means guarantees she'll make it out of the season alive. Jon Bernthal and Jeffrey DeMunn were both full-timers when their characters, Shane and Dale respectively, were whacked."