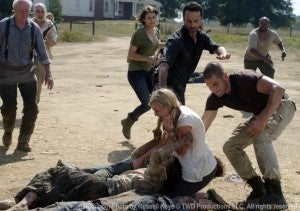 The midseason premiere of The Walking Dead has finally come and gone, and it began in an interesting and somewhat strange way—with the network urging viewers to visit an AMC website to enjoy a "two-screen experience" by allowing viewers to participate in an interactive online experience played in concert with the episode's story and in realtime as you watch the show. Interacting with other fans, answering trivia and watching videos available only on the site allow viewers sitting alone at home on a Sunday night to enjoy the experience of a viewing party. The degree to which it worked will be judged, more likely than not, simply by how long the network stands by the practice—but the network likely felt it needed a little something extra for fans of The Walking Dead who had grown accustomed over the first half of this season to more bang for their buck than jus t a one-hour TV show. Picking up literally from the moment the midseason finale left off, with Rick holding his revolver over zombie-Sophia, viewers were dropped this week into the shattered wreckage of life on the Greene farm, with mothers mourning their daughters and daughters mourning their mothers. Before the psychological horror of what just unfolded could begin to take too much hold of the group, though, Beth is attacked by the her reanimated mother, a walker the group had thought killed but who apparently had only collapsed during the melee. She escapes physically unharmed, but the trauma of seeing her mother--and, remember, the Greene family thought these were people who may one day be cured--gunned down was followed in short order not only by a confrontation with what her mother had become but by being forced to watch as this band of roving strangers kill her yet again, this time in a more brutal, gruesome and permanent fashion. While she's being comforted by her family, and Carol is spirited away by Daryl Dixon, Shane takes after Hershel like a man possessed. Accusing Hershel of having hidden the truth about Sophia from the group, Shane refuses to back down in spite of Hershel's denials and Rick's attempts to keep the peace. He's finally brought either to his senses or to a moment of stunned silence by a slap from Maggie before Hershel demands the survivors leave his land and his family disappears into the farmhouse.  Glenn follows them in, leaving Rick and Shane to debate whether Rick was right to feed into Hershel's delusions or whether Shane was right to cull the barn. Glenn and Maggie, sitting in the farmhouse, discuss the prospect of moving on--literally and spiritually--from the losses they're facing. Maggie, faced with the prospect of losing Glenn when his party moves on, quizzes him on his plans for the future. Carl and his mother commiserate over the loss of Sophia, with Carl revealing that while he had hoped to find her personally he admires his father for having done the right thing in putting her down. Agreeing to bury the three corpses closest to their group (Sophia, as well as Hershel's wife and stepson), the survivors opt to burn the rest; when the party breaks up, Rick and Lori briefly discuss Rick's leadership of the group while Shane starts an argument with Dale back at the campsite. He accuses Dale of being useless, mocking his inability to kill Shane in the previous episode, and then joins the rest of the survivors in digging graves for the loved ones. 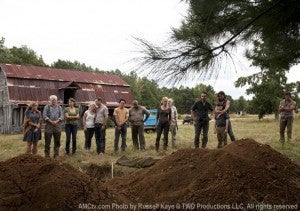 Back at the RV, Carol refuses to come to the service, telling the rest that it's not Sophia out there, that she died a long time ago and hadn't suffered in all the terrible ways they'd been imagining she had trying to live on her own. This brings Carol some comfort, but the others leave to attend the burial. Hershel, meanwhile, begins gathering up his wife's things and packing them away, then finds himself losing a staring match with a flask, before a silent moment around the burial sites. Alone in a nearby field, Carol begins by staring at a Cherokee Rose, her daughter's totem offered to her by Daryl, and then begins tearing at it and flailing in grief. As Rick, Dale, T-Dogg and Andrea gather the last of the walkers to be burned, the four of them enter into a debate about whether Shane's siege of the barn was right (Dale and Rick against, T-Dogg and Andrea for) with Lori walking the line and trying to keep the group from going at each other's throats. Back inside, Maggie offers Glenn a place to stay if the group leaves the Greene farm. As they begin to consider the question, though, Beth collapses and is left in an apparent state of shock while the rest of the group looks for Hershel to help. Having found the flask, Rick and Glenn resolve to find Hershel at the bar in town. Maggie tries to stop Glenn, and Lori tries to stop Rick from leaving, but Rick reasons that they need Hershel's medical experience to help deliver the baby and the pair leave. While cleaning himself up at a well (not that well), Shane sees Carol wander out of the woods. Inserting a bit of humanity into his hard-nosed and irrational exterior over the last several episodes, he sympathizes with her over the loss of Sophia and reassures her that he had no way of knowing that her daughter was in the barn, while exchanging loaded looks and touching hands. Dale tells Lori that he believes Shane not just to be impetuous, but actually dangerous, telling her openly that he doesn't believe walkers could have killed Otis and that Shane did it himself. Lori snaps to attention, and still has a hard time believing it, but is somewhat won over when Dale tells her that Shane all but confessed to him, and that sooner or later, a man like that is going to be a danger to someone else. Driving into town, Glenn admits to Rick that Maggie told him that she loves him, and that he doesn't believe it. After some prodding by Rick, he admits that he does believe her, but that he had not been able to say anything back to her when she said it. Rick encourages him to be up-front with her when they return home. After a moment of silence, Glenn admits to knowing about the pregnancy and having been the one to get Lori the morning-after pills during a trip into town. When he apologizes for keeping the information from Rick, Rick tells him not to be sorry--that even though his judgment was bad in that case, at least he was trying to do what he thought was right. It's an argument that will certainly resonate in terms of how Rick deals with Shane's transgressions. Back at the farm, Beth remains in what appears to be a shock-coma while her sister and a handful of the survivors keep watch over her and Lori splits time between watching them for progress and watching the road for Rick. After asking Andrea to watch over Carl, Lori approaches Daryl for help bringing Rick and Hershel back to help. After a few quiet, sullen moments, Daryl erupts at her and she leaves him to his whittling. 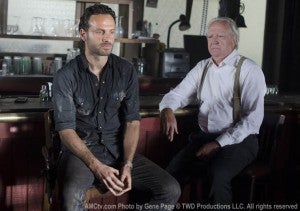 At the bar in town, Rick and Glenn enter to find Hershel staring into a glass of liquor. Hershel blames himself for Beth's state, saying that his hope had always been a false one and that the apparent miracle of saving Carl had been a sham. He's ashamed to return home to daughters that deserve better than the false hope he's been providing... At the farm, Lori loads a revolver and gets into a car, heading into town to find her husband and Hershel. While consulting a map for directions to the bar, though, she runs over a walker, then loses control of the car and flips it on the shoulder of the road. An altercation at the bar sees Rick and Hershel facing off, with Rick trying to talk Hershel into returning to the farm and Hershel refusing mostly on the grounds that he refuses to listen to Rick run his life; he says that not only did he realize during the massacre at the barn that his entire philosophy on the walkers had been misguided, but that he had seen on Rick's face when Sophia came out of the barn that there was no hope. Rick tells him that what they believe doesn't matter, that as the leaders of their respective groups they're responsible for giving hope to the others. This, finally, is a compelling argument for Hershel but when the pair turn to go, they're greeted by an anonymous pair of men who are surprised to see them alive. 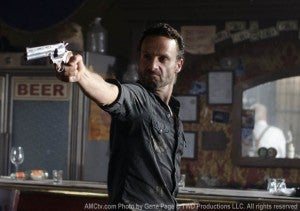 Dave and Tony are the men's names, and they join Glenn, Rick and Hershel for a drink. Despite a cavalier attitude toward the world they find themselves in, the pair get respectful quickly after hearing that Hershel had lost a number of people today. They explain that they've been on the road from the Northeast, moving Philadelphia to Washington, DC to the middle of nowhere, trying to find somewhere safe. They reveal that Fort Benning--the place that Rick and Shane have been heading all this time--has been overrun and that they're considering setting up camp in the area. They grill Rick a bit about where the group is staying, but Rick and Hershel are evasive, not wanting to give up the location of the farm to new and potentially dangerous visitors. The conversation quickly takes a turn for the confrontational, with Dave and Tony trying to talk Rick and Hershel into bringing them back to camp, first by simple persuasion and then, after being rejected, by increasingly menacing language. AFter a passive-aggressive confrontation, Rick shoots and kills both men, leaving Hershel and Glenn standing stunned at the bar while the survivors back at the farm light the pyres under the remaining walkers.

WWE Extreme Rules 2022: Who is Favored Going Into Each Match?

Clue Will Get a Full Relaunch in 2023