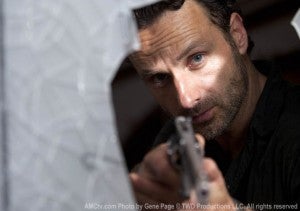 In the last couple of weeks, gunplay has had some pretty powerful impacts on Rick Grimes and the rest of the survivors on AMC's The Walking Dead, so it's probably not any great surprise that this week's episode is entitled "Triggerfinger," or even that the shots fired in the waning moments of last week's episode helped to shape the plot for this week. If you're anything like us, though, you found those final moments of "Nebraska" pretty compelling and want to get right to the episode discussion... As always, remember that these recaps are intended for viewers who have already seen the episode, or for whom spoilers are a non-issue. SPOILERS ON. The episode opens on Lori's car, in the darkness hours after her crash, with the walker she had hit struggling to bite his way into the overturned vehicle while she regains consciousness and begins to panic. On the other side of the credits, we hear Rick's shots, finishing off the men who were menacing him (along with Glenn and Hershel) at the end of "Nebraska," and then cut to the interior of the bar where Hershel and Glenn express their silent agreement with the decision Rick made. As they begin to pack up and leave the bar, however (with Glenn taking the guns off the corpses), they hear a car pull up and hide behind the door frame. Moments later, voices and shadows are falling across the trio, saying that they heard shots. Back at the overturned car, an impressively grotesque display of zombie makeup takes front and center as the injured walker from Lori's car accident forces his head into the shattered windshield, doing some pretty substantial damage to the skin on his face as he does so. Lori, for her part, is able to sneak to the back of the vehicle, but her weapon is pinned under a piece of the car. As the walker grabs her by the hair, she's able to kill him using a piece of the car, only to be set upon by another one from behind who she manages to incapacitate, but not stop completely, with a hubcap. Returning to the car, she's able to find a handgun and kill it, but anytime you fire a gun in this world, something bad is bound to find you... Around the dinner table, the survivors and the Greenes comment on their missing members. It's not long before they realize that Lori is gone, likely to chase Rick, and step away from the table to look for her. 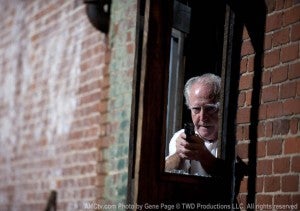 Back at the bar a series of gunshots disrupt Rick's plan to bring the three men out the back door, and it's only a moment or two before voices from outdoors come, asking after Dave and Tony. Rick admits to the men that their friends drew on him and lost, and while part of the outside party is eager to head home now that they know their friends are dead, the apparent leader refuses to leave without vengeance. Rick tries to persuade them that it was a case of "wrong place, wrong time," but gunshots begin raining in on them and the three have to scatter throughout the bar to take cover. At the survivors' campsite, Daryl and Carol sit around a fire, discussing Lori's attempts to get him to find Rick in "Nebraska." Carol begs him not to shut down following the loss of Sophia, but he storms off. The rest of the group confirms that they can't find Lori on-site either, and after ascertaining with Dale that nobody knew Lori was leaving and that it's uncertain she had weapons, Shane jumps into his car and tears off to find her. Back at the bar, Rick is reloading and still trying to talk reason to the gunmen outside. When he gets no response, he indicates for Glenn--armed with a rifle--to check the back door. In the store room behind the bar, he sees shadows outside the door and fires on the person going for the doorknob. Meanwhile, Shane finds Lori's overturned car and attendant dead walkers on the road, but hears a crashing sound and heads back to his car before he can find Lori herself. 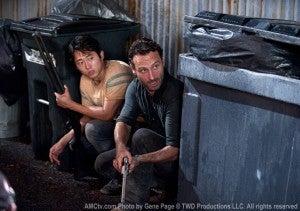