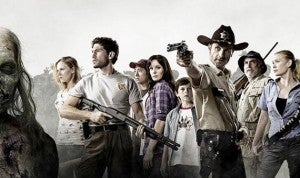 In a lengthy podcast interview with Nerdist (the site for whom Talking Dead host Chris Hardwick works), AMC's The Walking Dead showrunner Glenn Mazzara said that the often-criticized slow pacing of the second season's first half was a byproduct of a writing staff left to their own devices and writing by the seat of their pants following the departure of Frank Darabont, the show's co-creator and first season showrunner who was ousted after a number of high-profile disagreements with the network shortly before the second season began. "I felt that that criticism of it moving slow, I only buy that criticism so much," MTV Geek quotes him as saying in the interview. "I don't think the show moves slower than any other show on TV, any other character drama. The problem with this particular show or that expectation, is this is a marriage of a character drama and a horror show. So there's this added expectation." He did say, though, that the third season starts out with a bang, telling the interviewer that those who have seen the script have been wowed by it and described it as "balls out. It's fast, it's moving." He says the writers hope to keep that pace going all year long. The producer also told Nerdist that, had Darabont remained on staff, the end of the season would have shaped up a bit differently. Darabont was reportedly opposed to killing Dale Horvath, whose death with three episodes to go was a turning point in the season. It wasn't until after Darabont was gone that Mazzara says he realized that everything Darabont had rejected, including the pitch to kill Dale far earlier in the show than the comics, was back on the table. The third season of The Walking Dead starts filming any day now for an October premiere.