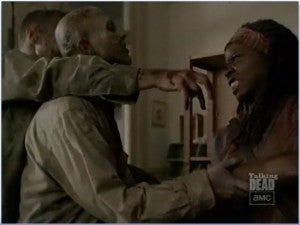 The teaser scene that gave fans their first real looks at Michonne and the third season of AMC's The Walking Dead, which aired last night on AMC at the end of their Walking Dead Marathon weekend, has now found its way online, so those who don't have cable (or, you know--the ones who have DISH and therefore have just lost AMC) can check it out and see what all they're missing. The scene clocks in at just under a minute, but of course it's not really a minute of action, since the first third or so of it is mostly just watching a sluggish and rotting zombie stagger his way through a building after hearing someone enter. Unfortunately for the walker in question, that someone is Michonne and...well, you can guess the rest. There's no dialogue here, which is probably predictable considering the players, but you also don't get to see the prison or (unless there's something afoot here that I don't know yet) Woodbury, so this was really Michonne's time to shine. It would probably be surprising, then, if executive producer Glen Mazzara didn't take the opportunity to show off some of that material--and maybe something with The Governor in it--at AMC's Walking Dead panel later this week at San Diego Comic-Con International.