A new set photo from the third season of AMC's The Walking Dead surfaced yesterday on Walking Dead News, and seems to suggest an unexpected connection between two characters. While it's unclear whether it's an official photo or just something someone snapped on the set, the message is unmistakable, as there is not one but two revelations buried in this one image. For your protection, we used a generic graphic at the top of the page but after the jump, we'll discuss it. Spoiler space Spoiler space Spoiler space That's right, folks--Merle Dixon, the first season chracter fans love to hate,is back! 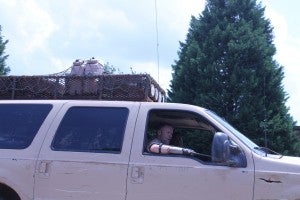 We see actor Michael Rooker in this image, sporting a prosthetic on his hand and riding in a vehicle that should look familiar to fans who have been keeping on top of news from the set of the upcoming season. Why? Becuase it appeared in the last Walking Dead photo that broke wide on the Internet--a photo of The Governor! So, yeah--Merle Dixon and The Governor? That's a combination to send chills down your spine.

Jeff Hardy Interested in Finally Being a Heel in WWE