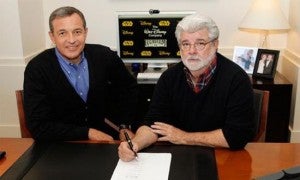 News broke today that Rick McCallum, a longtime producer for Lucasfilm who has worked on such projects as the Young Indiana Jones Chronicles, the Star Wars prequel trilogy and the Star Wars Special Edition trilogy, retired quietly in the months leading up to the Disney-Lucasfilm merger. McCallum, who has served on and off for about twenty years as the face of Lucasfilm when George Lucas himself wasn't willing or able, has been gone for a while, according to an article at The Playlist, which quotes Lucasfilm employee Steve Sansweet on the ForceCast last month. The sudden nature of his departure, coming with little fanfare and amid a corporate acquisition by Disney, has led many fans and entertainment journalists to wonder if McCallum was forced out as part of the Disney deal and its attendant restructuring. Of course, with Lucas himself retiring it's entirely possible that McCallum saw this as an opportune time to step away, lest he be caught in the gravity of the sequel trilogy and unable to do so should it occur to him in the next ten or so years to do. Among his other responsibilities, McCallum was the public face of the long-in-development, live-action Star Wars television series. The finish line seemed to keep getting farther and farther away for that project, and it's likely that in the wake of McCallum's departure the idea will be either retooled from the ground up or, more likely, scrapped entirely at least until a movie or two is in theaters. Disney mentioned Disney XD as a potential home for Star Wars programming (which, based on the network's other programming, one would assume would be animated) but live-action TV has been largely absent from any official discussions of the franchise's future so far.