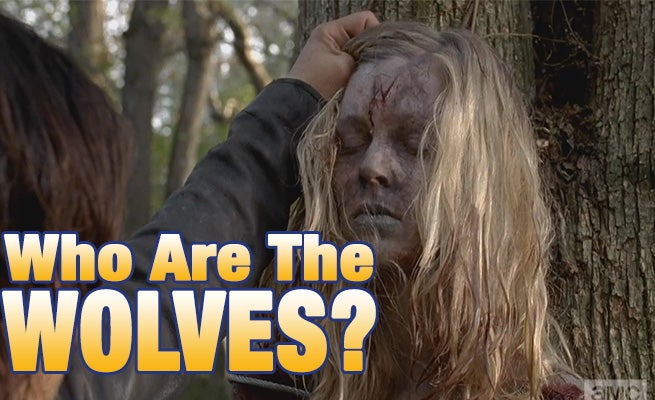 A few weeks ago, I discussed the possibilities of who The Wolves might be. While I have similar theories about who they are, we now have a lot more evidence supporting each. It's easy to draw comparisons from The Walking Dead comic books considering how tightly the show has been following it's source material lately.

First of all, the most likely candidate is that the Wolves are the television version of the DC Scavengers. In the comic books, the Rick vs. Peter Anderson saga culminates with Rick putting a bullet in Peter's head. This gun shot has a much bigger significance. The shot is heard by Derek, the leader of the DC Scavengers. They are a group of just that, scavengers. They're the type of people who Deanna would not permit into the Alexandria Safe-Zone community. They follow the sound of the gun shot and show up at Alexandria's gate demanding entry.

As you would imagine, anyone demanding anything from Rick doesn't go well for them. Andrea (who looks to be replaced by Sasha) posts up in the bell tower and snipes the Scavengers. While there was no W's on foreheads in the comic books, it's still possible that the Scavengers have been marking W's on walkers as if to mark their territory.

In the long run, the DC Scavengers aren't very important, but the gun fight at the Alexandria gate has an impact. A series of events unfolds from here. The gun fight draws a massive horde of walkers. The horde claims several lives in the Alexandria community, including Douglas Monroe. It also claims Carl's eye and leaves him scarred for life because as Douglas was going down, he fired gun shots in every direction while panicking, one of which entered Carl's head through his eye and exited through his temple.

Shortly thereafter, the group finds Jesus who tells them about his and other communities with which the Alexandria community can begin trading. Then of course, this leads to the entrance of the next candidate for the Wolves. Negan and his group of crazy bandits, the Saviors, stop Michonne, Carl, Maggie, Rick, and sadly, Glenn on their way to the Hilltop community. We all know what happens here… Negan brutally beats Glenn's head in with his barbed wire covered bat he likes to call Lucille.

The Saviors seem much more fitting to be the Wolves. As I said, the Scavengers don't play a major part in the comics. They're around for the equivalent of one, maybe two, episodes. The Saviors, however, are a twisted, sadistic group which matches the description given by Greg Nicotero a few weeks ago on Talking Dead. The Saviors hold up at a warehouse type of building called the Sanctuary, where Negan lays with his many wives and brands those who don't listen to him with an iron on their face.

The part that really makes me believe that they fit the role of the Wolves is the fact that have used walkers as weapons. Not only do the Saviors keep zombies chained to the walls around their Sanctuary as a defense system, but Negan has ordered his crew to cover their weapons and ammunition with zombie guts so that one strike against an enemy will take their life. Their twisted methods seem fitting enough to mark W's on walker heads to mark their territory, if not property.

Of course, some fans are theorizing that the W's aren't in fact tied to the Wolves, but in fact are related to the comics newest group- the Whisperers. The Whisperers are very young in terms of development, so for the show to be introducing them already would be interesting. The theory feels like it was disproved last week when we found the walker tied to the tree, eaten, with a W on it's forehead. The Whisperers don't kill zombies. Rather, they wear zombie flesh masks and disguise themselves to fit in and roam freely. In the most recent issue, it was revealed how lawlessly and inhumanely they live, but that's besides the point.

In any case, the mystery of the Wolves was built on in the season finale. We saw more of their cruel, inhumane side. While they don't seem like a large group, they look organized despite how evil and crazy they might be. The trailers filled with walker bodies establish their mindset. They have unconventional methods but must be a force to be reckoned with if they've lasted this long in the apocalypse. Most likely candidate: beefed up DC Scavengers storyline.

Who Are The Wolves In The Walking Dead?