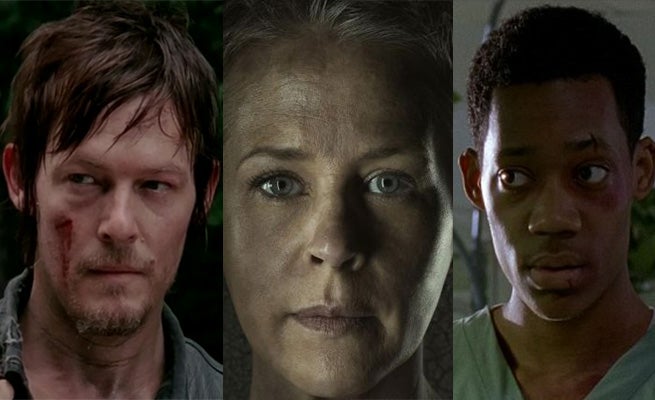 There are rumors flying around that in the upcoming episodes of The Walking Dead, we will say goodbye to more than one character we've come to know. Whether this means the characters in the group of survivors we've been following from the beginning or the ones we've met at Alexandria, no one can say for sure.

It seems pretty clear that Rick will be safe for a while. The Walking Dead can be shocking but not that shocking. I also think Carl's life is safe, while his eyeball or something along those lines might be at risk.

Also among the "safe," characters:

Sasha- Sasha seems to replacing Andrea's role in the comics and will be too critical to kill off now.

Maggie- Maggie becomes the leader of another community in the comics and her story is definitely not finished on the show. She's the last of the Green family and will be sticking around through the rest of season 5.

Glenn- Keeping Glenn around also keeps comic fans guessing when Negan will appear and that is fun for the writers and production team. Glenn, like Maggie, has more story to tell. Even if they do kill him off upon the introduction of Negan, that won't be this season.

Daryl- While it would seem like ratings suicide to kill Norman Reedus' fan favorite character, it would also be a perfect way to prove that no one is safe. Also, the synopsis for the Season 5 finale says that Daryl gets in trouble outside the walls of Alexandria.

Carol- She's way too happy. I know it's a front for the undercover scheme she's running with Rick, but characters who become favorites for the fans, get awesome monologues, and great development are usually the first to go. On top of that, she killed herself a long time ago in the comics, so her future is uncertain in that sense.

Peter- Who's Peter? Jessie's overly-assertive husband and Alexandria doctor. Yeah, that guy. I know we just met him, but he is going to butt heads with Rick just as he did in the comics. As fans of The Walking Dead, we know that usually doesn't go well for anyone. In the comics, Peter kills Douglas' (Deanna on the show) wife, which spurs a series of events culminating to Rick becoming the leader of the Safe-Zone. Peter seems like the best best on who will die in "Spend."

Noah- Noah is a wild card like Daryl and Carol in that his character isn't around in the comics, but Tyler James Williams, who plays Noah is around in real life. In that life of his, he just signed on for a recurring role in CSI: Cyber. It's tough to imagine someone playing two recurring roles at the same time, so I'd say Noah is as good as walker-bait.

Who do you think is on the chopping block on The Walking Dead? Sound off in the comments section!

Who Dies On The Walking Dead "Spend" Episode?