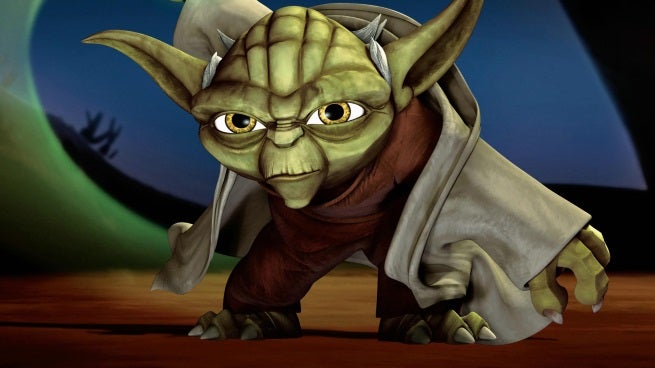 TV Guide is reporting that Yoda will be making an appearance in an upcoming episode of Star Wars Rebels, or at least his voice will. The great Jedi master will reach out from his place of hiding to offer some help and advice to Kanan and his young padawan, Ezra.

"I felt personally to keep Yoda as this disembodied thing it would confuse the audience less," executive producer and episode director Dave Filoni tells TV Guide. "I didn't want you to think Yoda could be teleporting from planet to planet."

Frank Oz, who has voiced Yoda in both his puppet and digital forms in all six of the Star Wars films, will lend his voice to the character once again for the episode.

"What's great about Frank, by keeping the voice very present and active, you do feel that it's a watchfulness and that he's speaking to you from afar," Filoni says. "And I didn't want anyone to think that he had left Dagobah [the planet where Yoda first trains Luke Skywalker]. It was on the outer rim of what we do, but I think we were able to pull it off."

Filoni also hints that fans can expect reference back to the Star Wars films, included The Empire Strikes Back, and to his previous animated series, Star Wars: The Clone Wars.

"This is show is meant to fit in with everything that's going on: Clone Wars, features, novels," Filoni says. "We do a lot of work to make sure there's continuity between these things now."

The episode, titled "Path of the Jedi" will air Monday, January 5 at 9 p.m. ET on Disney XD. The episode will be released early, via the Watch Disney XD app , on Monday, December 29.