While there's not another issue of Shattered Grid this week, Power Rangers fans do get a fantastic celebration of the series with the Anniversary Special, and we've got a preview of the big event right here.

The Anniversary Special is a celebration of the franchise's 25 year milestone, and features stories from across the Ranger timeline. As you can see in the preview, fans will get new stories from several eras, including one that focuses on a classic villain turned Ranger. That would be Karone, aka the In Space villain known as Astronema, and fans will see her put on trial for her multitude of crimes against the galaxy.

This seems to take place after In Space but before Lost Galaxy, as in the latter series, Karone would end up helping the Rangers by recovering a Quantum Saber stolen after the Lost Galaxy Pink Ranger Kendrix fell. That would eventually lead to her becoming a Ranger herself, but it isn't clear here if she already has that role or if it is before she undertook that quest.

Astronema won't be the only villain to make an appearance. Rita Repulsa and Scorpina also show up in the first story and happen to mention Lord Zedd. Hopefully, he shows up by issue's end as well.

Fans will also see a hidden link from Mighty Morphin to Power Rangers Ninja Steel courtesy of the lovable Mick, who evidently knows Alpha 5 from a caper involving some Kahoolian Eggs. While Alpha 5 doesn't go too much into detail, we really need to know why he's rocking that top hat and mustache. 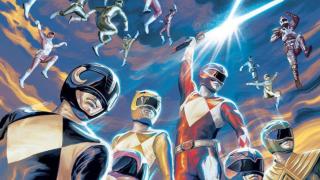 You can check out the entire preview in the gallery.