The Power Rangers find themselves at a crossroads, and the person who has the answers is not even on the planet.

Light spoilers incoming for Mighty Morphin Power Rangers #21, so if you haven't read the issue yet you've been warned.

The fallout from Mighty Morphin Power Rangers #20 continues, as the Rangers now know about the first Power Rangers team that Zordon assembled. Obviously, the Rangers want answers, but Zordon is still stuck somewhere in space-time, and that leaves Alpha 5 to scramble for answers.

That all sounds bad, but at least it gave fans an excuse to get to know Grace Sterling, who is quickly becoming one of the best new additions to the franchise in years. Sterling was revealed to be the original Red Ranger, and now you can understand why. She's blunt, but not in a mean-spirited way, and despite the massacre that happened all those years ago she's been able to do things that Zordon simply won't.

Part of that lies in her ability to work within the moral grey. It allows her a sense of practicality which Zordon lacks, despite his best intentions, and it shows in her handling of Finster's unfortunate experiments. The sacrifice of one is acceptable to understand helping the multitude, something the Power Rangers just won't accept. It's a difference of opinion but not necessarily ideals, as they both want the same thing. 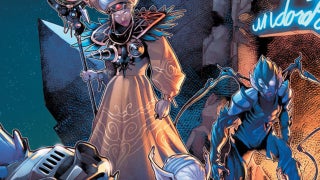 Writer Kyle Higgins continues to build the Rangers up as individuals, but his work on Sterling is exceptional, as is his ability to weave in pieces from other sections of Power Rangers lore. The issue contains more than a few surprises, including one big hook for next issue, but does so without sacrificing the main plot of Finster's rather terrifying work.

Art wise the book serves the narrative well, casting the brighter colors of the Rangers in stark shadows to mirror the heavier tone of the story. Jonas Scharf and Joana Lafuente deliver solid characters and better monsters, but they really shine when Zords become involved. There are some rough spots here and there, but overall the art mixes with the story just fine.

Mighty Morphin Power Rangers continues to expand the universe while simultaneously developing its characters. Not only that but new additions like Grace Sterling feel completely natural, and only help to provide new wrinkles in the familiar dynamic between the rest of the team. If you're a Power Rangers fan, there's simply no reason to be missing out.