BOOM! Studios released a new preview for next week's Mighty Morphin Power Rangers #34, and it seems the Rangers are finally getting to bring their Zords to the party.

The new preview starts with the Rangers attempting to figure out just what the Solar Ranger's is. The Solar Ranger unleashes its energy to give them all a boost of power, but their search for any trace of the Morphin Grid starts and stops with their ship. Cam deduces the energy traces are coming from the , suggesting that the device might actually be a broken and warped piece of the Morphin Grid itself.

That'as a hard pill to swallow for the other Rangers, but it makes sense. Unfortunately, they don't have much time to talk about it as the Praetor is demanding they give up Ellarien and the to walk away free. Tanya tries to talk them down but they aren't budging, but they do have an ace up their sleeve.

Kim fills Ellarien in on a few things regarding the Morphing Grid, specifically that she should have the ability to not only harness the energy to create a suit but also weapons. uses it to conjure up her energy critters, but Kim deduces that they should be able to unite and also draw something else from the , and that means Zords. From that last panel, it looks like it works, and we can't wait to see a full-on Zord battle Beyond the Grid style.

That also means we'll be able to see just what a Solar Ranger Zord will look like, and as we've seen from the Ranger so far, the possibilities are off the charts. 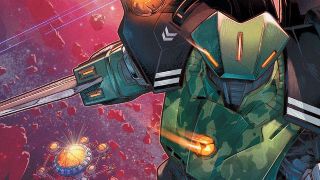 You can check out the new preview in the gallery and in the images above.

Mighty Morphin Power Rangers #34 is written by Marguerite Bennett and drawn by Simone Di Meo with a cover by Jamal Campbell. The description is included below.

"As dark forces coalesce around this new team of Power Rangers, they're confronted by the sinister enemy who's been secretly plotting their downfall…and that of the entire universe."

So what do you think of this week's preview? Let us know your favorite moment in the comments and also let us know how you've been enjoying the series so far!

Preview: The Power Rangers Finally Get Their Zords In Beyond The Grid