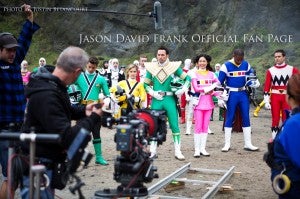 In the "better late than never" department, we're in the waning hours of August 28, 2013--the twentieth anniversary of the first episode of Mighty Morphin Power Rangers. Their coming-of-age was noted by a lot of the mainstream press that wouldn't ordinarily cover a decades-old kids' show that is no longer the ratings behemoth it once was--but the series continues to score with audiences and is a consistent seller of merchandise (once again this year, Power Rangers Megaforce is expected to be the top seller among many costume retailers for Halloween). Jason David Frank, arguably the most recognizable former Ranger, told TMZ that he was celebrating twenty years of "MMPR" by going to Skydive Spaceland in Houston today to jump out of a plane. Frank has been aggressively promoting the 20th anniversary in interviews, including a junket stop at San Diego Comic Con International last month. "The ability for a young, ordinary teenager to save the world is something that's always been core to Power Rangers," Elie Dekel, president of Saban Brands and a member of the original team behind the show, told Time. "It's highly aspirational to kids." The series also filmed a star-studded 20th Anniversary show this year wherein many of the previous iterations of the Rangers will return to reprise their roles--and recently announced a massive box set collecting the series' first twenty years. "It continues to be one of the more relevant licenses out there," said Russ Crupnick, an analyst who follows the toy industry. "You've got a brand essentially that parents have also grown up with. Parents like brands that convey familiarity and in a sense safety."