It's no secret that people complained about the violence shown in The Walking Dead's Season 7 premiere on October 23. Not only did they complain -- many of them stopped watching altogether. From Episode 7x01 to Episode 7x02, nearly five million people took the AMC series off of their Sunday schedules.

Since the premiere, the story on The Walking Dead has not called for very much violence until the midseason finale which aired on Sunday night. Not one but two characters were killed. One key Alexandria character was literally gutted, realizing his gorey, horrifying comic book death in front of the entire town. It was easily the most gruesome death of the episode we were able to see.

Immediately following Spencer's gutsy death, Olivia was shot in the face. Rather than blowing her head off, the show merely displayed a small bullet wound on her face which penetrated her brain, preventing reanimation. The imagination prompted by that last sentence was worse than the actual reveal on television.

Then, there's the death which preceded both of the Alexandrians: Fat Joey. In Daryl's escape from the Sanctuary, he went full-Negan and used a pipe to bash in the Savior's skull. However, none of it was shown on screen. Not a single blow to Fat Joey's skull was in the camera's frame, Nor was the aftermath -- something this show usually prides itself on.

So, has The Walking Dead tuned down the violence in the aftermath of being heavily criticized over the brutal display of Glenn and Abraham's deaths 8 weeks ago? It sure does seem like it. 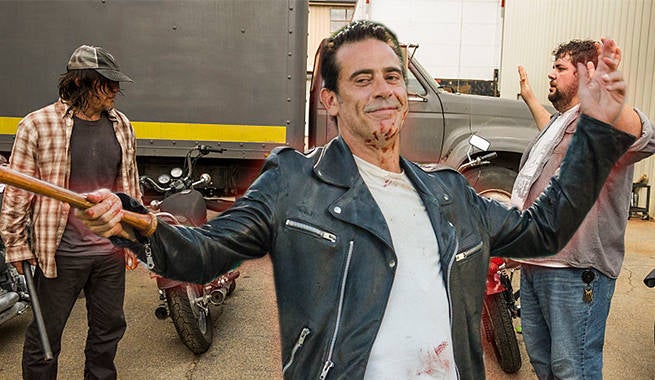 Of course, Episode 7x08 was filmed long before Episode 7x01 aired. By the time Season 7 premiered, production on the series was already reaching the later episodes of Season 7's second half. If the violence were taken back a notch, it was during post-production.

To outright claim The Walking Dead has tuned down its violence would be jumping the shark a bit but considering all of the factors and how important the series is to AMC, it's not an unlikely scenario. The series has seen considerable week to week drops throughout Season 7, with the first bright spot coming in last week's Episode 7x07 as the first week to week gain finally came with Carl's big eye socket reveal.

Spencer's death was an opportunity for The Walking Dead to expose its guts in a major way but two quick shots of Spencer reeling from his stomach being ripped open were the most violent moments of the episode. Historically, such a moment would be explored in full gory glory, but instead the focus was on Alexandria's reactions. Yes, it was gross and bloody and full of death, but it felt like a small step back from the violence we've come to expect.

After all, the violence is not why we watch The Walking Dead. The series came full circle in eight episode. What started with a broken group at the mercy of a merciless mad man ended with a rebuilt bunch coming together to take on the big bad. Whether or not the series took a step back from exposing horrifying violence in its midseason finale, the loyal fans are sticking with it, either way.

Has The Walking Dead Toned Down Its Violence Since The Premiere?

The Walking Dead: World Beyond Turns Jadis Into a Villain

The Walking Dead: World Beyond May Explain What Happened to Heath