It feels like just yesterday, the world was dying to know who Negan killed but, here we are, with three episodes remaining in The Walking Dead's seventh season.

The Walking Dead's Season 7 finale promises to be something drastically different from any before it. ComicBook.com has gained several cast member perspectives of the season's final hour and twenty-five minutes set to air on April 2, which are rounded up on the following slides, but most recently caught up with Morgan Jones actor Lennie James for his take.

"It's really weird actually, because our finales have slightly kind of outdone themselves over and over again," James said. "I've kind of run out of descriptions for it and I think this will describe how gigantic, or fantastic or amazing or wonderful it all is."

"Well, for me there's two moments in the script where I jumped up and down like a giddy school boy," James said. "Not just at the excitement of being part of the scenes that I was reading, but just in how exciting it's going to be if we pull it off."

"Considering one of those points when I jumped up and down like a giddy school boy, I was on an airplane, you can get some kind of sense of just how into it I was and how exciting it must be, because I did attract a little bit more attention to myself than I'd intended. It's an exciting episode in keeping with our tradition of leaving our fans with a bang in our season finales. The finale of Season 7 will not disappoint, it's a good one, it's a really good one. There are a couple of moments that are fantastic and genuinely, genuinely exiting. Even for someone as jaded as me."

On the following slides, stars such as Andrew Lincoln, Jeffrey Dean Morgan, Austin Amelio, Ross Marquand, and more weigh in on the moments referenced.

The actress charged with playing Carol on The Walking Dead has one long word to describe the Season 7 finale and wanted to make sure she got the perfect amount of "A"s in her description of her reaction while talking to ComicBook.com.

Whatever this moment McBride and James are talking about it, it sounds ike all of the weeks of watching Rick humiliated and bullied by Negan are finally going to pay off when the season comes to a close.

Dwight actor Austin Amelio used an interesting pair of words in his description of the Season 7 finale.

"It's huge," Amelio said. "It is huge. The viewers are going to be very fulfilled, I think. It's a big turning point. I am extremely excited to share it with everyone. It's a big one."

First of all, it's already ironic for Amelio to use such the word "turning point" given our expectations for Dwight based on the comics. The character is the one Savior who betrays Negan in favor of Rick and Ezekiel ahead of the imminent war in Robert Kirkman's books. Whether or not he will fulfill such a storyline on television, only Scott Gimple could know.

Based on the fact that Rick Grimes is said to have an epic moment, which Jeffrey Dean Morgan says Andrew Lincoln "earned," we might have our first shot of Alexandria, the Hilltop, and the Kingdom coming together for the war ahead and sending the Saviors running for the hills. 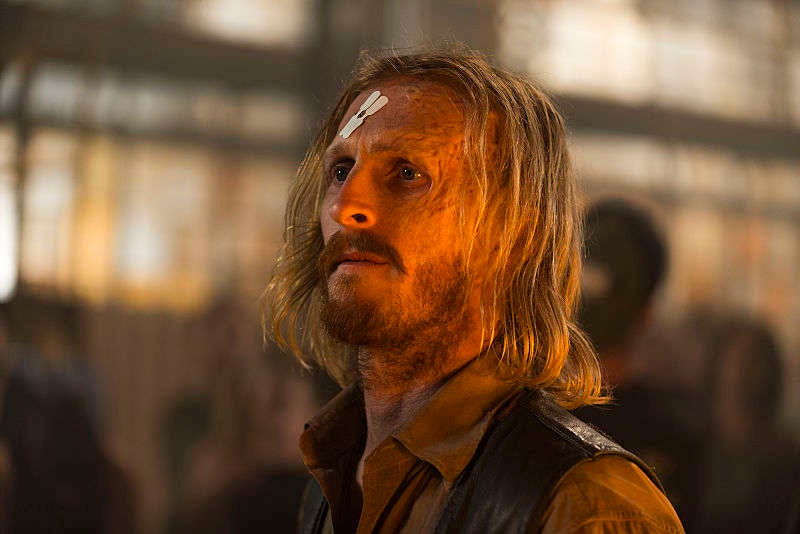 Speaking to Paul "Jesus" Rovia actor Tom Payne, ComicBook.com asked for some perspective on the episode which has already been hyped by Ross Marquand, Andrew Lincoln, and others. Payne's take is no different: the finale is going to an epic conclusion to an intense season.

"The finale has a lot of ups and downs to it," Payne said. "It's very emotional. It really takes you in lots of different directions. It has you crying and then it has you cheering."

Payne is aware of the other actors' comments, as well. For more on his co-stars' perspectives, hit the next couple of slides. In particular, though, Payne pointed out Lincoln's excitement regarding one particular moment.

"It's funny, because I read people's interviews as well, and I've read Andy's interview, and I know which moments he's talking about," Payne said. "We're so fortunate in that we get to be in the show, but we get the script before everyone else so we get to see moments happen before everyone else. We're in it and we experience it in the same way that the fans do. We enjoy putting it on screen and giving the fans that experience. It's kind of annoying that we have to wait seven weeks to see the finale, because as much as I know what happens, I want the audience to see it and enjoy it as well. It's definitely a big one. It's exciting, and exciting to then see where the story will go for the 100th episode next year."

If anyone can use an uplifting moment in The Walking Dead's Season 7 finale, it's Rick Grimes. The character started the season being humiliated and broken by the new villain in town after watching two of his family members brutally slaughtered.

It looks like Rick is going to get that moment, if Andrew Lincoln's reaction is any indication.

"I promise you, there is one beat in 16, I dropped my script and started punching the air and did a little jig," Lincoln said in an interview with EW.

With an inevitable war coming, Rick and his Alexandria community can use a moment of positivity worthy of some air punches and a dance. Most fans will probably agree.

On board the Walker Stalker Cruise, Morgan addressed the moment Lincoln referred to and says he earned one, all with a little bit a of giggle.

"I'm glad Rick can have a little moment. Good for him," Morgan said. "I'm glad that Rick can have a moment. I think this has been a tough season. So, if he gets to have a moment where he can jump around and be happy... If anybody's f---ing earned it, it's Andy Lincoln. And, as a fan of the show, I was even a little happy he could have a moment. Maybe Negan was sort of happy. I think Negan will be amused by him having a moment."

Speaking to ComicBook.com in an exclusive interview aboard the Walker Stalker Cruise, Aaron actor Ross Marquand had similar sentiments to Payne. The actor stressed the gargantuan qualities of the upcoming episode.

King Ezekiel is ready to hit up the Season 7 finale party, too.

In an exclusive interview with ComicBook.com, Payton had a more reserved approach to avoid potential spoilers but uses one word specifically to describe the final hour of The Walking Dead's seventh season: "epic."

"They're a better judge of how big it is," Payton said of his co-stars who have been around for years. "All I know is that it was a hell of a lot of fun. I can't wait to see everything all put together. Epic is the right word."

The director of the episode has also chimed in. Executive producer Greg Nicotero promises that the finale will be "everything" fans could possibly want in an exclusive conversation with ComicBook.com.

"It's an amazing script," Nicotero said. "It was written by Scott [Gimple] and Angela [Kang] and Matt Negrete. How can you get along with those three?"

"It's everything that you would ever want," Nicotero said. "It's thrilling. It's emotional. It's powerful. Everything that's, when our show fires on all cylinders you can't stop it."

"I feel that episode hits every mark. It was a blast to shoot. I had a ton of fun. I was a little, even surprised, because the season was hard. We started the first half of the season, it was such a downer. Watching Rick, when I was doing the panel I said it's like taking Rick's face and shoving it into a pile of shit. Expecting the audience to go along with that, it's hard. It's tricky emotionally, and it's tricky for the actors, it's tricky for our audience.

As for whether or not Season 7 will have a cliffhanger similar to that of Season 6, Nicotero said it was still unclear at the time of the interview two weeks ago.

"I don't know," Nicotero said. "I've turned in my cut, but Scott [Gimple] hasn't done his pass on it yet so nobody's seen it. I've seen it, the other executive producers have seen it, and that's it. The actors haven't even seen it."

Fear The Walking Dead is Best in Years Right Now