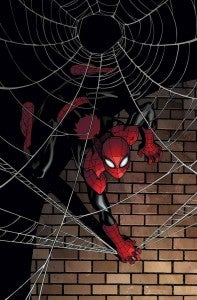 Ed McGuinness, the former Hulk and Superman/Batman artist who designed the changes to Spider-Man's classic costume for the upcoming Superior Spider-Man series by Dan Slott, Ryan Stegman and friends, has provided a variant cover to Superior Spider-Man #2, due out at the end of the month.

The issue, which will reportedly see the Superior Spider-Man facing off against a redesigned Secret Six, a team that Otto Octavius (the man secretly posing as Peter Parker and therefore the star of the series) once belonged to himself. This seems a recurring theme so far, after Doc Ock's own technology attacked him in Avenging Spider-Man #15.1 and he'll be forced to face off against a Stilt-Man that he himself recently refitted in the next issue of Daredevil.

The main cover for this issue, by artist Ryan Stegman, features the Superior Spider-Man appearing to plant an unwanted kiss on Mary Jane Watson, Peter's ex-girlfriend (and unbeknownst to either of them, ex-wife). Mary Jane's resistance to the kiss sparked some controversy back when the cover was first shown at New York Comic Con, but objections to the pairing of the characters have only gotten louder since the identity of the Superior Spider-Man was revealed and it became clear that the character is effectively impersonating Peter in order to get access to Mary Jane. Series editor Stephen Wacker has done his best to downplay these concerns on social media.

Check out the solicitation information for the issue, which our best guess says should be out on January 23, below.