The Marvel Cinematic Universe has amassed an impressive reputation as the leader in blockbuster entertainment, with films that set a new billion-dollar standard for the industry. The studio has become such a success that the "Marvel Movie Formula" is now an accepted term of superhero movie construction.

However, along with the "Marvel Movie Formula" comes the unfortunate (but well-earned) stigma that the movie villains are in need of improvement.

We've ranked Every Major MCU Movie Villain, from worst to best. As the title of the list implies, there are some DETAILS to consider:

Not hard to imagine why this gem is at the bottom of our list: it was probably the biggest hit to the MCU's reputation that Marvel has taken to date.

Iron Man 3's big reveal that "The Mandarin" was a drunken actor named Trevor Slattery pissed fans off so bad, that Marvel went back to retcon that development. Now that the one-shot "All Hail the King" has revealed there's a real Mandarin out there in the MCU, he just needs to arrive to erase this traumatic memory.

Corey Stoll's Darren Cross in Ant-Man would probably be as hated as The Mandarin, except that he actually suited up and fought the hero.

Other than that, Darren Cross is a baffling blend of total comic book archness and stone-faced psychopathy. Silver lining: he's pretty good and dead now.

Mickey Rourke tried to go deep in order to play this MCU mashup of Marvel Comics' Crimson Dynamo and Whiplash, but all we really got was an inexplicably quirky villain who got sidelined for most of Iron Man's middle section. When he was onscreen, his action sequences weren't all that exciting.

Iron Man was an unknown quantity when it kicked-off the MCU in 2008. In addition to the star power of Robert Downey Jr. in the lead, moviegoers were excited to see Jeff Bridges playing Tony Stark's mentor and business partner, Obidiah Stane.

Malekith got a great actor in former Doctor Who Christopher Eccleston. Unfortunately, Thor: The Dark World traded the more nefarious aspects of the comic book version for what might be the most bland villain in the MCU.

He also has the honor of having the most vague plan, as well as the weakest MacGuffin in The Aether/Reality Stone, and possibly the dumbest boss battle of them all. Poor Malekith is pretty much a collateral victim of the misfire that was Thor 2.

Dormammu is a giant fiery entity in Marvel Comics, and has had some great artists make his dark visage flourish on the page.

Dormammu in the Doctor Strange movie is just plain funny looking (like a psychedelic Wizard of Oz), and since the movie mainly plays him for comedic relief, he's not all that fearsome, either.

Still, he is god-like entity from the Dark Dimension, so there's still potential for a better showing to come.

The Mandarin may have been fake, but the man pulling his strings was a hardcore villain, indeed.

Guy Pearce gave Killian some rare charisma for an MCU villain, and was casually ruthless in the best way. He also wasn't afraid to get his hands dirty - whether that meant using his own people as unstable explosives, or trying to beat Tony Stark and all of his Iron Man armors down with his bare, Extremis-enhanced hands.

If Iron Man 3 had invested more in Killian instead of bait-and-switch, we may have gotten the best villain of the trilogy - instead of just half of one.

Ronan the Accuser has had such a long and interesting character arc during the course of Marvel Comics history. Sometimes a villain, other times an ally, often somewhere between both.

Actor Lee Pace played a version of Ronan that started out well within the boundaries of comic canon - but ultimately, Guardians of the Galaxy used him for a standard 'destroy the world' villain part, and has (for now) removed him from the Marvel Cosmic game board. Kind of a big waste.

Actor Mads Mikkelsen is great, so even though we didn't really get to know his Doctor Strange villain Kaecilius, he still makes an impression. Not too arch, but rather dedicated to a skewed set principles, he was a well-balanced character who deserved more depth - especially with his backstory.

But in the end, this was another bland and thinly drawn Marvel movie villain, who only makes the list because even though he's technically a henchman, his boss does so little in the film it's hard to count him as the "primary." 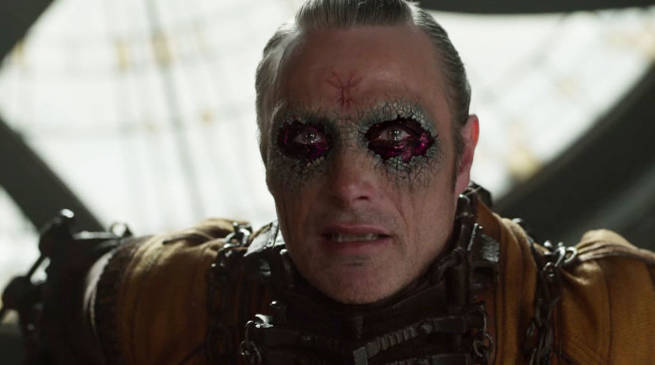 Leave it to a talented character actor like Tim Roth to turn a bruiser villain like Emil Blonsky into an interesting foe that could carry a whole movie.

Meanwhile, it's almost tragic to admit that The Abomination still holds up as one of the best superhero movie monsters we've seen, and his final battle with Hulk is arguably one of the best in any MCU movie.

We still can't really explain his convoluted plan in full, but actor Daniel Brühl gave such a compelling performance as a cerebral and tactical villain that it's easy to overlook his flaws.

...Such as, an almost total lack of physical action, and being a complete alteration of comic book canon. The fact that he's still around has us excited for his role in the MCU's future.

Thanos is - simply put - one of the most badass villains in the Marvel Universe. With actor Josh Brolin playing him, and The Infinity Gauntlet at his disposal, Thanos is poised to deliver an epic challenge to every single one of the MCU movie heroes.

...Except he hasn't actually done sh*t yet! Big grins and threats are fun, but after so many films it's about time for The Mad Titan to get his hands dirty. Bring on Avengers: Infinity War!

If you underestimate Alexander Pierce in Captain America: The Winter Soldier, just remember: This is the guy who staged a HYDRA coup of SHIELD; brutually conditioned Winter Soldier to terrorize and kill; nearly used advanced Helicarriers to wipe out millions of people; and even shot his own housekeeper to death while drinking a glass of milk!

Only an actor as talented as Robert Redford could take a standard Marvel movie villain role, and make it look so cool (even rational) to be so evil.

Fans everywhere were intrigued when it was announced that The Blacklist star James Spader was playing Ultron in Avengers: Age of Ultron. The actor's trademark is his idiosyncratic personality and delivery, and matching that to a ruthless A.I. robot was a big question mark.

Well, we may not have gotten the exact menacing version of Ultron we know from the comics, but Spader nonetheless created a fun and charismatic MCU villain for the Avengers to face.

Hugo Weaving may not be eager to return to the MCU, but his version of Red Skull in Captain America: The First Avenger is still one of the most satisfyingly accurate adaptations of the comics there is.

From his pinpoint accent, to nailing the Skull's aristocratic psychopathy - and even throwing down with the hero in a satisfying final battle... Only in hindsight do we see that Red Skull was a distinguished exception amongst MCU villains, not the standard.

Some would argue that Winter Soldier qualifies as a henchman - but at this point, he's also the most impactful and interwoven bad guy in the collective history of The Avengers heroes.

Winter Soldier's introduction and 'force of nature' presence in the Captain America sequel terrified and thrilled viewers - and the revelation of him killing Tony Starks parents downright horrified them.

Bucky Barnes may end up being one of the MCU's biggest heroes, but as we saw in Civil War, that dark, deadly, villain will always be alive somewhere inside him.

Tom Hiddleston's face and charisma helped launch the MCU in Phase 1, and definitely helped make The Avengers a billion-dollar success. He was supposed to have his story begin and close in Thor, but has been so invaluable that he's been brought back for central roles in Thor: The Dark World, and soon, Thor: Ragnarok as well.

How long will Loki rule as king of MCU movie villains? Only time will tell... you mewling quims.

Who is YOUR favorite MCU villain from our list? Vote below and click any of the movie titles at the bottom of the page for more info on that Marvel film.

Thanos: Death Notes Explores Thor's Death at the Hands of the Mad Titan