The trailer gave us our first look glimpse at the villain Hela (Cate Blanchett), ruler of the Hel, the Asgardian underworld, in action.

As in the Marvel Comics Universe, the Hela of the Marvel Cinematic Universe appears to be quite skilled with a sword. She wields a blade in combat in multiple scenes in the trailer.

The Thor films of the Marvel Cinematic Universe have, like Marvel's Thor comic, been influenced and inspired by the fantasy genre, and the fantasy genre loves few things more than it loves a magic sword.

Could Hela be wielding on such enchanted blade? She has used several such powerful weapons in the Marvel Comics Universe, so we're considering which of those comic book weapons could have snuck its way into Hela's hand in Thor: Ragnarok.

Keep reading through the slides to learn more about some of Hela's possible weapons of choice in Thor: Ragnarok.

WATCH: Check Out The First Trailer For Thor: Ragnarok

In Marvel Studio's Thor Ragnarok, Thor is imprisoned on the other side of the universe without his mighty hammer and finds himself in a race against time to get back to Asgard to stop Ragnarok—the destruction of his homeworld and the end of Asgardian civilization—at the hands of an all-powerful new threat, the ruthless Hela. But first, he must survive a deadly gladiatorial contest that pits him against his former ally and fellow Avenger—the Incredible Hulk! 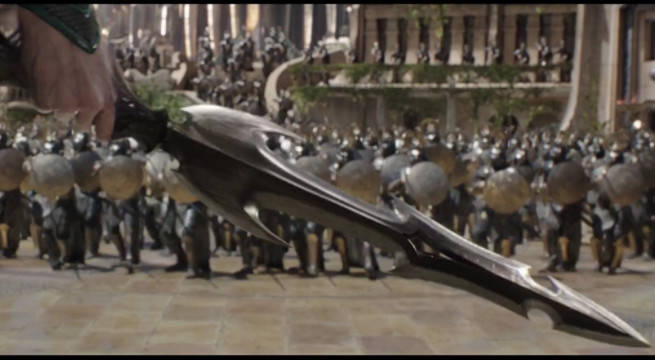 The simplest answer to the question, "What is Hela's sword?" is simply that it is just that: her sword.

Hela's favored blade is often called the Nightsword. The Nightsword can become charged and wreathed in green flames. 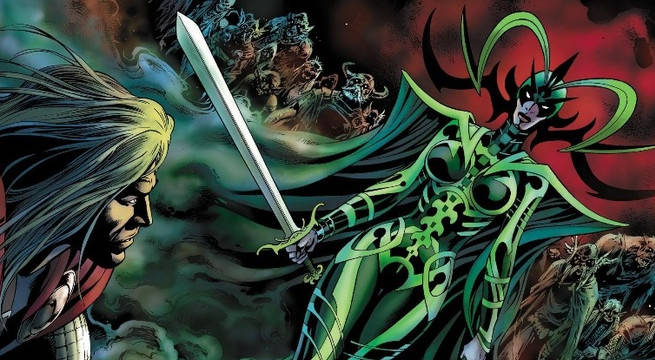 The Sword of Twilight, also known as the Sword of Doom, is an immensely powerful sword crafted by Surtur, the demon lord, in the heat of the Burning Galaxy.

The Twilight Sword may be of importance in Thor: Ragnarok because Surtur is prophecized to light Twilight on the Eternal Flame and use the sword to bring Ragnarok to the gods.

Additionally, one of Hela's plots in the marvel Comics universe saw her briefly take control of the Twilight Sword. Twilight imbued her with so much power that it threatened to unbalance the very cosmos and so Thor was forced to stop her.

Perhaps this storyline partly inspired the plot of Thor: Ragnarok.

Gorr used the weapon to commit serial deicide across the cosmos.

All-Black the Necrosword is capable of Umbrakinesis, the ability to control darkness, as well changing shape itself. This is particularly interesting because Hela's blade looks different in different shots of the trailer, and each form closely resembles a shape taken by the Necrosword in the Marvel Comics Universe.

If Hela's plan is to eliminate the gods of Asgard, then All-Black the Necrosword certainly seems like the perfect weapon for the job.

Thor: Ragnarok: What Is Hela's Sword?