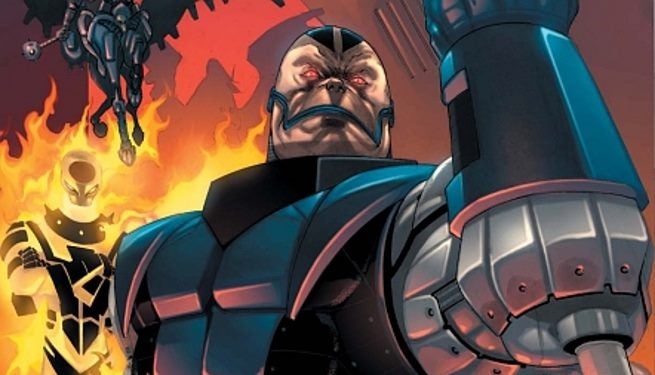 Back in January, Oscar Isaac started mentioning some details about the film version of Apocalypse, the X-Men big bad that he'll be playing in X-Men: Apocalypse. Apocalypse has a long history, and a long list of powers for a mutant. Isaac hinted at some, but we're going to give you a rundown of all the abilities that En Sabah Nur is known to possess.

Let's start with the basics. Apocalypse is known to have superhuman strength, on par with that of the Hulk. That means he can handle tons of weight. He also has superhuman stamina, to the point that he is seemingly immune to fatigue, and near invulnerability, amplified by the enhancements granted him by the Celestials.

Then we get to the bit that Isaac was talking about, his ability to manipulate the molecules of his body. This manifests in a few different ways. First, he can shapeshift, changing his appearance in a manner similar to how Mystique's powers work. He can also alter his size, either elongating his limbs or growing to immense heights. He can also turn his limbs into different kinds of weapons, like an axe or a maul.

Apocalypse possesses the ability to manipulate energy. He can absorb various kinds of energy to augment his own speed and strength to even higher levels. He can also use energy to generate force fields, or to project outwards as a weapon.

Additionally, Apocalypse has shown some telekinetic ability, which he sometimes uses to grant himself flight. Apocalypse has also used the ability to teleport, on both himself and others. He can even teleport buildings, if he so chooses.

Perhaps most importantly, Apocalypse is basically immortal. His body does not age, and, with the help of Celestial technology, he can enter a comatose state to regenerate from almost any wound. His blood is also capable of rewriting another organism's DNA, and he can interface with technology, meaning that his existence can continue outside of his own physical form.

Add all of that together, and you've got one nasty foe for the X-Men to take on in the next movie.